Defense Against Invasion: the Littlest “Defender” 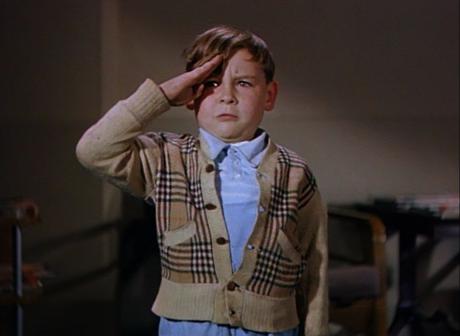 In the book’s filmography, in compiling my entry on the nontheatrical health short Defense Against Invasion (1943)

, I included some pretty extensive credits for the animated portions of the film but skimped on the live-action sections. That was partly because the animation is a much more interesting part of that film than the live-action framing story, but also because very little documentation of the live-action scenes has survived in the Walt Disney Archives. And I didn’t want to credit some people and ignore others.

At least in this forum, however, we can give credit to the littlest “defender” against invasion, the smallest of the four boys who are seen in the doctor’s office in those live-action scenes. This little trouper was Dickie Hall (sometimes billed as Richard Hall), who enjoyed a minor career as a child performer in the 1940s. Today’s film enthusiasts, especially fans of MGM’s long-running “Thin Man” series, may know Dickie best as Nick Charles Jr., the very young son of William Powell and Myrna Loy in Shadow of the Thin Man (1941)

. And, in fact—perhaps coincidentally—real fans of the “Thin Man” series, who bought the complete “Thin Man” DVD collection, can also see Dickie in one of the bonus extras on the Thin Man Goes Home disc: the 1944 Robert Benchley short Why Daddy? In this short, pint-sized Dickie, as a fellow contestant on a radio quiz show, subjects Benchley to a humiliating defeat.

Around this same time, Dickie also had the dubious distinction of appearing in some of the last shorts in the “Our Gang” series. By 1944 “Our Gang” was on its last legs, having fallen precipitously from the hugely enjoyable heights it had once enjoyed at the Hal Roach studio. Inspiration and story material were wearing thin in the mid-1940s, and finally even MGM had to throw in the towel and bring the series to an end. But that wasn’t Dickie’s fault.

Book Reference:
South of the Border with Disney