T. Hee on the radio 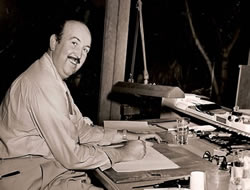 At the time of Pinocchio’s release in 1940, the Disney and RKO forces mounted a wide range of publicity activities. I commented on some of them in the book, including T. Hee’s trip to New York. Thanks to his unusual name and colorful personality, Hee’s New York visit became a little publicity campaign in itself, producing several newspaper interviews—and an appearance on Fred Allen’s popular radio program.
Today, thanks to the Internet Archive, we can hear that program for ourselves. This is the broadcast of 27 March 1940, with Hee as a special guest. He makes his appearance about 19 minutes into the program and, in scripted comments, pays tribute to Walt and to some of his fellow artists. His conversation with Allen also includes a surprising amount of technical detail about the making of the film, for a popular-entertainment program. As a bonus, one of the show’s featured musical numbers is “Give a Little Whistle.” Many thanks to the Internet Archive, and very special thanks to Jennifer Hendrickson for bringing this to my attention.
Click here to listen