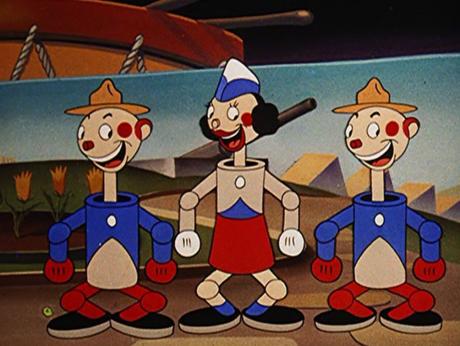 It’s been some time since I wrote about the cartoons of the Walter Lantz studio, but that’s not for any lack of interest in them on my part. Speaking as an animation historian, I do specialize in documenting the history of the Disney studio and its classic films—but speaking as a fan, I just love classic Hollywood cartoons in general, and I have an affection for those of the Lantz studio. And, in fact, there are historical links between the Disney and Lantz studios. Most fans are aware that Lantz produced a long-running cartoon series starring Oswald the Lucky Rabbit, a character originated by Disney in 1927. Beyond that, in the relatively small community that was the animation industry of the 1930s and ’40s, the two studios drew to some extent on a common pool of talent. More than a few artists worked for both companies at one time or another. (Lantz historian Tom Klein has recently done some ground-breaking research on this subject, to be published soon.)
One intriguing chapter of Lantz history was a series of shorts called the Swing Symphonies, launched in 1941. Disney’s Silly Symphonies, introduced more than a decade earlier, had already inspired an assortment of similarly music-themed cartoons from other studios: Looney Tunes, Merrie Melodies, Happy Harmonies, Color Rhapsodies. The difference with the Swing Symphonies was that they were built around contemporary swing music. Their grounding in the latest big-band sounds gave them an up-to-the-minute currency in their own time, and gives them a special nostalgic flavor today. The first entry in the series was $21 a Day (Once a Month), released early in December 1941.
Like the other Swing Symphonies, this one takes its title from its featured song. “$21 a Day (Once a Month)”—the title refers to a soldier’s pay—reflects not only contemporary swing music, but also the militaristic fervor that had been building in American popular culture throughout 1941. The U.S. was still not officially a participant in the World War, but the conflict was raging elsewhere in the world. As the prospect of American involvement loomed ever nearer, the growing national preoccupation with military service was palpable. “$21 a Day,” the song, had been written earlier in 1941 by Ray Klages and Felix Bernard for a feature film, the service comedy Top Sergeant Mulligan, produced by Monogram.
Here the song is used as the basis for a cartoon that begins, like other cartoons of the time, with toys in a department store coming to life. But this toy department has a military theme, and the camera quickly moves to a miniature army camp populated by wooden soldiers and stuffed animals. As these fanciful GIs go through their daily routine, they segue into the title song, a brisk, up-tempo number performed on the soundtrack by the King's Men (special thanks to Keith Scott for identifying the uncredited singers). The lyric is a catalog of the day-to-day drudgeries of a soldier’s life—early reveille, inspections, long hikes—and all “for twenty-one dollars a day, once a month.” There’s no real story in this film, just a performance of the song—but the song itself is a period delight, with a hard-driving sound that unmistakably evokes the early 1940s, and comes complete with a boogie-woogie piano interlude. And, as pictured here, it’s punctuated with a nonstop parade of sight gags, pleasingly animated by the Lantz artists. One of the credited animators is Frank Tipper, one of the aforementioned animation veterans of wide experience. Tipper had worked at the Disney studio a full decade earlier, and had put in stints at three other studios before arriving at Lantz in the late 1930s for an extended stay.
For enthusiasts of the Lantz studio, there’s an added bonus in this short: unbilled cameo appearances by two of the studio’s regular cartoon stars. Today Lantz is best remembered for Woody Woodpecker, and in late 1941, when this film was produced, Woody was barely a year old. He puts in a brief appearance here, turning up without warning at the end of a line of wooden soldiers—happily still sporting his original homely, thick-legged character design—and disrupts the precision of their march. Andy Panda’s appearance is even more fleeting: he’s the bugler who alerts the troops that their long-awaited pay is available at the paymaster’s window.
$21 a Day was released on the first day of December 1941. A scant week later, Pearl Harbor was attacked and the U.S. was officially plunged into World War II—and suddenly this cartoon became even more timely. During the next four years, the mood of a nation at war would be reflected in countless motion pictures, both live-action and animated, from the Lantz studio and others. This November, as we observe Veterans’ Day, some of the tributes will focus on World War II—a war of which many of us have no firsthand memories. We are a more fortunate generation; we have the luxury of revisiting the era through nostalgic time capsules like this delightful animated cartoon.