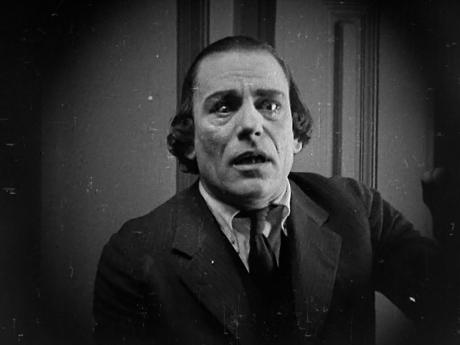 Turner Classic Movies—one of whose many fans I am—carries on a varied range of activities under its broad TCM umbrella. One of my favorites, and one I’d like to see more often, is a DVD series labeled “TCM Archives.” Each of these wonderful 2-disc sets is stuffed to overflowing with delights for the film enthusiast. A good example is The Lon Chaney Collection, a veritable banquet for anyone who cares for silent films in general and Chaney’s films in particular. The collection is highlighted by two key Chaney features, the cult favorite The Unknown and the almost equally celebrated Laugh, Clown, Laugh, along with a host of other Chaney delicacies. These include a reconstruction, via scene stills, of London After Midnight—the closest we’re ever likely to get to actually viewing that legendary lost film—and a documentary on Chaney’s life and career which far outshines the usual bonus-feature “documentary,” having been produced by no less than Kevin Brownlow and Patrick Stanbury.
Almost hidden among this wealth of Chaneyana is another treat: a third complete feature, The Ace of Hearts. Part of the genius of the “TCM Archives” format is that, along with the celebrated titles, it affords a showcase for deserving lesser-known films that otherwise might never find one. The Ace of Hearts is a case in point. Produced at an important juncture in Chaney’s career—following his breakthrough in The Miracle Man but preceding his iconic appearances in The Hunchback of Notre Dame and The Phantom of the Opera—this usually-overlooked feature offers a special attraction. Here, without benefit of shocking makeup or melodramatic action, Chaney’s acting talent is the whole show—displayed with minimal distractions in a no-frills showcase. To be sure, Chaney’s sensational makeups were never used just as a gimmick; anyone who has seen his best films can testify to the brilliance of his raw acting ability. But the point is made unmistakably clear, once and for all, in The Ace of Hearts.
The story is simple: a romantic triangle involving Chaney, Leatrice Joy, and John Bowers. All are members of a radical secret society; all are fanatically devoted to their “cause”—in particular Leatrice Joy, who is so preoccupied with the society’s mission that she has no thought of romance with either of her suitors. Eventually she does accept Bowers’s proposal, but the plot has more twists in store before film’s end. One of the hallmarks of Chaney’s performances is a powerful, brooding intensity, and much of this film is designed to display that intensity. On Joy’s and Bowers’s wedding night there’s a protracted scene, alternating between the couple in their rooms and Chaney, standing in a pouring rain on the street below, watching their window—a scene that seems inserted for the sole purpose of dwelling on Chaney’s anguish and communicating it to the audience. Here, as in other Chaney vehicles, the sheer force of his talent elevates the material and makes it seem stronger than it is.
The Ace of Hearts is directed by Wallace Worsley, who directed other Chaney vehicles including The Penalty and The Hunchback of Notre Dame (and written by Governeur Morris, who had written the source novel for The Penalty)—but has none of the visual or dramatic pyrotechnics of those films, opting instead for a quiet simplicity. The film’s treatment of “a certain brotherhood,” as a title describes the secret society, is worth noting: the members are depicted not as wild-eyed radicals but as sober and mature individuals. The film’s portrait of them borders on dark, tongue-in-cheek comedy; we are told only that they intend to assassinate a certain wealthy capitalist, who is known henceforth as “the man who has lived too long.” Clearly, this is lightweight material—but presentation is everything, and here the presentation is stately, almost allegorical, and marked by pleasing subtleties of direction, lighting, and photography.
For the fan who is already familiar with Chaney’s well-known classics, The Ace of Hearts offers an intriguing sidelight on yet another facet of the actor’s talent. For that matter, Leatrice Joy and John Bowers, likewise better known in other films, can also be seen here in an unaccustomed light. Raymond Hatton, whose career as a character player spanned a good six decades of Hollywood history, contributes an offbeat cameo here as the assassins’ target. It’s easy enough to overlook a minor film like The Ace of Hearts, but the viewer who seeks it out is apt to find him- or herself making return visits to this quirky little mood piece.