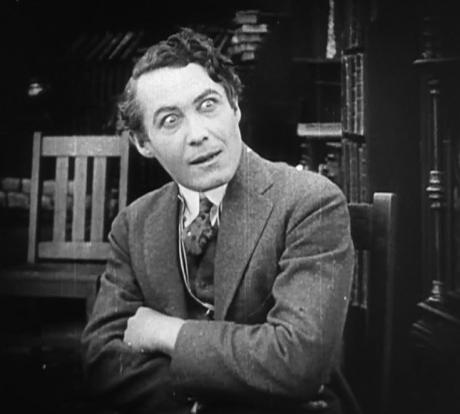 One of the things I love about Le Giornate del Cinema Muto, the great silent-film festival staged every October in Italy, is that it covers the entire spectrum of the silents: both the well-known landmarks and the obscurities ripe for rediscovery. The festival’s “Griffith Project,” in which I had the great good fortune to participate, achieved the ambitious goal of screening all of D.W. Griffith’s surviving films, not only the textbook classics but also the seldom-viewed minor works that came in between. (At the rate of one week per year, it took twelve years to cover all of Griffith’s surviving output!) This month, in honor of the Giornate, I’m revisiting one of those lesser-known works by the great director—doubly appropriate in the season of Halloween, for The Avenging Conscience is based on the works of, and saturated with the spirit of, Edgar Allan Poe.
I’ll stop short of calling this feature a full-fledged horror film. In 1914, of course, there was no established tradition of horror films as we know them today (Edison’s 1910 production of Frankenstein notwithstanding). The Avenging Conscience is something more quirkily personal than that anyway: an atmospheric mood piece drawing on ideas and techniques Griffith had pioneered during his preceding years at Biograph, now with the luxury of a full six reels in which to build his story. His original touch is everywhere in this film, from the casting of familiar stock-company faces, to the use of natural landscapes to help conjure an atmosphere, to the allegorical visions of peace in the closing reel. Still, the works of Poe are at the center of Griffith’s vision in this film, and he achieves some effects that must have been more than a little disturbing—and, at times, downright hair-raising—to unsuspecting audiences in 1914.
It’s well known that Griffith cherished a lifelong admiration for Poe’s writing, and he draws principally on two of the author’s works in this film: the poem “Annabel Lee” and the short story “The Tell-Tale Heart.” (As if to leave no doubt about his sources, he directly illustrates text from both works on the screen!) But The Avenging Conscience is not simply a film adaptation of either or both of these pieces. As Russell Merritt has pointed out, Griffith creates something far more complex here: a web of filmic/literary connections that emerges as an eerie, haunting dream. The protagonist, played by Henry B. Walthall, is seen as a budding author who is himself obsessed with the works of Poe. None of the characters in the film is identified by name, and we’re told that Walthall’s sweetheart, played by Blanche Sweet, is simply “she whom [Walthall has] chosen to name ‘Annabel’.”
And yet, as the story proceeds, Walthall’s character also becomes a sort of Poe surrogate. I try to avoid spoilers in this column, but it’s no secret that in this film Walthall, separated from his sweetheart by a jealously possessive uncle, conceives the idea of a murder and then, like the protagonist of “The Tell-Tale Heart,” gradually succumbs to madness as his conscience torments him. The shudders in this film are prompted less by the events of the plot than by the images by which Griffith pictures them on the screen. His long-time cameraman, Billy Bitzer, a skilled and underrated craftsman, plays an indispensable role in creating that dark imagery.
Bitzer’s assistant at the time was Karl Brown, later a distinguished cameraman and director in his own right. In his memoir Brown recalled that the symbolic insert shots that signal Walthall’s growing fixation—a spider devouring its prey, and other grim images of the murderous impulse in nature—were assigned to him. Elsewhere in the film, Griffith and Bitzer experiment with matte and double-exposure effects, evoking nightmarish visions as Walthall is haunted by his victim. Then again, Griffith sometimes falls back on subtler methods. More than one writer has singled out the brilliant scene in which the detective (Ralph Lewis) questions Walthall—the latter’s mounting hysteria triggered by cutaways to drumming fingers, a tapping foot, a swinging pendulum. It’s a virtuoso showcase for understated cinematic technique, suggesting the work of later filmmakers like Hitchcock or Val Lewton.
Henry B. Walthall is ideally cast as the protagonist of this story. In his five years with Griffith he had frequently shown his ability to suggest disturbing undercurrents of madness by the slightest flicker of a smile or change of expression. In this story, that talent finds ample scope for expression. As for Blanche Sweet, I admit to a personal bias. Some readers of this column are already aware that I’m conducting a long-term research and writing project on Blanche’s career, and I feel that her presence automatically elevates any film in which she appears. In The Avenging Conscience she’s a ray of pure sunshine in what is otherwise a dark, dreamlike, and morbidly enthralling tale.