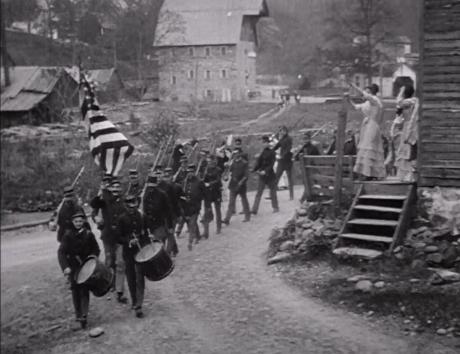 Earlier this year, The Birth of a Nation turned 100. D.W. Griffith’s incendiary epic of the Civil War and Reconstruction premiered early in 1915, and today remains no less controversial—quite likely more controversial —than it was a century ago. As one of the milestones of film history, The Birth is hardly a candidate for a monthly department devoted to obscure films. Even if it were, this is not the place for an extended treatment of its deeply troubling content (especially since I’ve already joined other writers in discussing this film in depth on an earlier occasion). But it does seem fair to point out—without making any excuses—that most of the furor surrounding The Birth has centered on Part Two of the film, the part that deals with Reconstruction, and the part that is most deeply rooted in Griffith’s unfortunate choice of Thomas Dixon’s The Clansman as source material. Part One, the part depicting the Civil War itself, has inspired far less outrage and far more admiration for Griffith’s masterful evocation of sweeping historical events. In his passionately felt recreation of the war, I think, we have something much more representative of, and much more in keeping with, Griffith’s preeminent stature as a filmmaker.
That’s why I’m proud of Kino for issuing The Birth in DVD and Blu-Ray packages that also include an assortment of Griffith’s earlier Civil War films for the Biograph company. His Biograph period (1908-1913) coincided with the semicentennial of the war, a time when that excruciating national conflict was very much in the public mind and was a frequent subject of popular literature, theatre, and film. Griffith, the son of a Confederate officer and steeped in family lore, made his share of one-reel Civil War films during those years. Allowing for the short running times and meager budgets of the Biograph films, those earlier efforts afford us a chance to appreciate his cinematic vision of the war, divorced from Dixon’s rabid rhetoric.
In the Border States wasn’t Griffith’s first Civil War subject, but it’s the earliest one available in this collection. No inflammatory content here; the story is one of Griffith’s characteristic mini-dramas of characters faced with decisions, and the consequences of their choices. Here a Union soldier (Charles West) goes off to the war and leaves his family alone. Later his small daughter (Gladys Egan) gives aid to a fugitive Confederate soldier (Henry B. Walthall), first by giving him a drink from the family well, then by hiding him from pursuing Union troops. At length West, himself wounded and pursued by Confederates, returns to take cover in his own home. The soldier leading his pursuers is Walthall. Tracking West to his home, Walthall prepares to capture or kill him—but then recognizes the little girl who had saved his own life, and repays the favor by shielding her father from his fellow Confederates.
What sets this little tale apart is Griffith’s handling of it. More than one commentator has observed that Civil War subjects brought out Griffith’s best from the beginning, his natural filmmaking instincts augmented and enhanced by his emotional involvement in the material. Here, less than two years into his directorial career, we can see Griffith’s skills on display: his handling of actors, his parallel editing, his celebrated use of landscape—in this case the picturesque Delaware Water Gap, standing in for contested border territory during the war years. The scene of West’s leavetaking makes clever use of Biograph’s paltry resources to construct a convincing image of a company of Union soldiers, marching proudly off to war to the cheers of their small community. Griffith’s Southern sympathies notwithstanding, he frequently used Northern characters as protagonists in these stories. This one depicts sympathetic characters from both sides of the conflict, and invests them with small touches of humanity.
The two key players in the film, of course, are Gladys Egan as the little girl and Henry B. Walthall as the Confederate soldier. Both were regular members of Griffith’s Biograph “stock company” during these years. Little Gladys was the go-to girl in any scenario involving children, and while I confess I’m not one of her great admirers, she pulls off a complex acting challenge in this film with professional skill. Her most demanding showcase is the scene in which Walthall, gasping for water, approaches the family home. Torn between her humane instincts and her conditioned hatred for the enemy’s uniform and everything it stands for, she mirrors an inner conflict that probably held a special resonance for Griffith. As for Walthall, his appearance here as a Confederate soldier carries a resonance of its own, especially in hindsight. For better or worse, his performance as the Little Colonel in The Birth of a Nation would become the defining role of Walthall’s career. To see him here, five years earlier, is to see the seeds of that performance already being planted. In early May 1910, when In the Border States was produced, Walthall had been a member of Griffith’s company for just under a year. Here, as elsewhere, Griffith makes use of his intensity and theatrical gestures to construct a compelling cinematic performance.
In the Border States is a minor film by any standard, but that’s precisely the reason for seeking it out. In this miniature setting, we can isolate and appreciate aspects of Griffith’s legacy that are all too easily overlooked in the wider canvas of history.