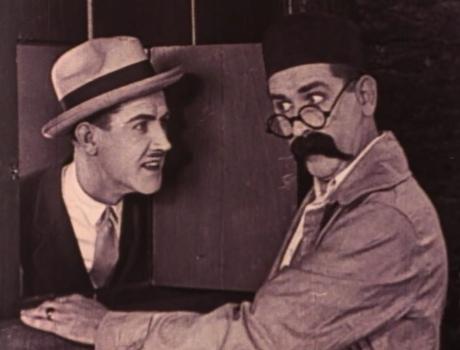 Like so many other film-history enthusiasts, I got my introduction through the comedies of the silent period: “comedy’s greatest era,” as James Agee famously described it. I cut my cinematic teeth on the works of Chaplin, Keaton, Lloyd, and Langdon—a glorious banquet, guaranteed to leave the viewer addicted for life—and then went on to explore the lesser-known comedians of the silent era. One of the best-known of those “unknowns” was tall, thin, dapper, quick-witted Charley Chase. During the 1920s and ’30s, working principally at the Hal Roach studio, Chase appeared in scores of fresh, witty two-reel comedies, both silent and sound. It’s practically impossible to find a bad one in the lot. Chase’s silents included several that have become particular favorites among latter-day fans: His Wooden Wedding, Limousine Love, Mighty Like a Moose, and a few others.
But years ago the Pordenone silent-film festival presented a Chase retrospective that went beyond the familiar favorites, and I was pleased to discover that many of the obscure titles were equally engaging. One short that particularly impressed me was The Caretaker’s Daughter, and for years afterward I carried a glowing memory of it. Thankfully, Milestone eventually produced a Charley Chase DVD collection that included that and other rarities. Now these films are within the grasp of the home viewer, and I’m happy to report that it wasn’t just my imagination. The Caretaker’s Daughter is hilarious, a worthy addition to the Chase library.
Like many of Chase’s best silents, this one is directed by the legendary Leo McCarey. The action is unevenly divided into three sections, the first two centered on Chase’s troubles with a broken-down automobile—a rich source of material for more than one comedian during these years. For the benefit of those who haven’t seen the film, I’ll avoid any spoilers here. Suffice it to say that these scenes are delightful and spontaneous, and seem to have been improvised on the spot. And in fact, from what we know of the Roach studio’s craftsmanship, they likely were improvised, an inventive piece of exposition to set up the third section of the film.
In any event, Chase’s car troubles serve to bring him and the rest of the cast to a mountain cabin where the central action of the short plays out. This is one of many marital farces in which Chase appeared, built on comic misunderstandings. Here his wife (Katherine Grant) suspects him of a clandestine affair, when in fact Chase is innocent and is simply covering for his boss. Others involved in the goings-on include James Parrott, Chase’s real-life brother, who enjoyed a movie career of his own; here we get to see the two brothers in the same film. Parrott appears here as the cabin’s caretaker, complete with eccentric costume and mannerisms.
Here again I’ll avoid details, other than to reveal that somehow, in the course of the action, three characters decide—separately, and unbeknownst to each other—to impersonate the caretaker. The result is something akin to an elaborate variation on the “mirror routine,” a time-honored staple of vaudeville, immortalized on screen in numerous films (notably Chaplin’s The Floorwalker and the Marx Brothers’ Duck Soup, also directed by McCarey). Here there’s no mirror, imaginary or otherwise, but we do get four players all running around claiming to be the same character—and, at that, the most comically peculiar character in the picture! In addition to Parrott and Katherine Grant, the cast also includes beloved Roach perennial James Finlayson (in an unusually brief appearance) and George Siegmann, familiar from serious roles as a member of D.W. Griffith’s stock company.
For that long-ago Pordenone showing, the festival organizers were obliged to show this film in 16mm (possibly the only print available, possibly one reason for the film's relative obscurity). I suspect the Milestone DVD is drawn from the same 16mm source. No matter; a slightly soft image is a small price to pay for the chance to enjoy this inventive and enormously likable comedy. Both Charley Chase and Leo McCarey have long since established unshakeable places in film history; The Caretaker’s Daughter confirms their mastery once again.