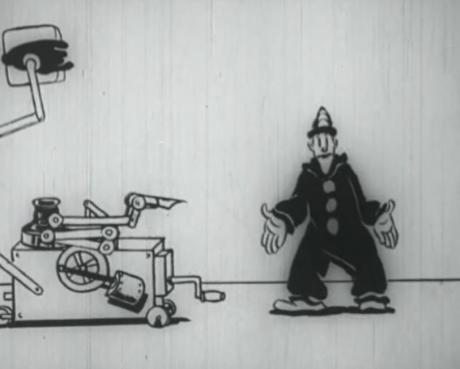 By the time this column appears online in June 2017, the curtain will be rising on the San Francisco Silent Film Festival, an event that invariably ranks as a high point of the film enthusiast’s year. This year’s program is, as always, overflowing with treasures, and a special presentation by master preservationist Serge Bromberg promises to be one of the festival’s highlights. I’m singling out just one of the rarities scheduled for Bromberg’s presentation: Cartoon Factory, a gem of animation from 1924.
By 1924, of course, the animated cartoon had long since moved out of the novelty class and had become a regular part of movie theaters’ programs. And the cartoon field was a crowded one. In 1924 a young Walt Disney was getting his first national exposure with his Alice Comedies, but many other animation studios were already well-established and turning out films of their own. One of them was the Fleischer studio, operated by Max Fleischer and his brothers, who produced Cartoon Factory as part of their signature series: Out of the Inkwell.
For those unfamiliar with the Out of the Inkwell cartoons, let this serve as a strong recommendation. In my opinion, the Inkwells were among the best films the Fleischer studio ever produced, fully on a par with their later Betty Boop and Popeye the Sailor cartoons in the sound era. The premise of the series was simple: Max Fleischer, appearing onscreen as an artist at his drawing board, would dip his pen in an inkwell—hence the series title—and draw a picture of a cartoon clown. The clown would then come to life on the paper and cavort in his cartoon world. Frequently the clown would also escape the confines of the drawing board and enter the real world, making mischief among the people and objects he encountered in Max’s studio and in the world outside. At the end of the reel, faced with some impending disaster, he would escape danger by diving back into the inkwell from which he had come.
The framework of the series was as simple as that—but it served the Fleischers well as the basis for scores of cartoons, produced over a period of more than ten years. Moreover, the films were consistently fresh and inventive. The filmmakers frequently made use of special animation techniques and camera tricks to concoct delightful visual gags, playing on the link between the real and the cartoon world. The onscreen relationship between Max and the clown (eventually christened “Ko-Ko”) evolved during the 1920s, often becoming adversarial as Max and Ko-Ko engaged in contests or outright battles of some kind. It’s not an exaggeration to speak of Max’s appearances in these films as acting performances. One or two of the films practically amounted to live-action comedies starring Max, punctuated with quick cartoon interludes.
Cartoon Factory maintains the more usual dynamic, preserving a roughly equal balance between animation and live action. It’s also an appropriate introduction to the series, with a “plot” whimsically touching on the very nature of cartooning and animation. Here Max (who did, in real life, have a strong interest in science and technology) invents an electric pen which, via stop-motion animation, comes to life and draws Ko-Ko’s body on the paper for him. The pen goes on to draw a parallel device for Ko-Ko’s benefit: a machine equipped with a pen and an eraser. Ko-Ko is delighted when the machine draws a delicious meal and a beautiful girl—but before he can eat the meal or kiss the girl, the machine, operated by Max, erases them both.
The situation escalates from there. Ko-Ko’s “cartoon factory” is a mobile unit, mounted on wheels, which rolls along the paper sketching scenery as it goes. (This is one of the delightful reversals characteristic of the Fleischer films: Max’s pen, an actual physical object, draws cartoon images, while the cartoon pen draws real furniture and other articles.) Ko-Ko makes use of the machine to “draw” a soldier who looks like Max. The ersatz Max goes to work drawing an army of identical soldiers, and orders them to attack Ko-Ko! Clown and cartoonist marshal their forces for an all-out conflict, but before the hostilities have advanced very far, Ko-Ko dives back into his inkwell, to return another day.
Cartoon Factory is not the best known of the Out of the Inkwells—but all the more reason to focus fresh attention on it, here and in San Francisco. It is a thoroughly enjoyable little film, and a good introduction, if one is needed, to a charming, lively cartoon series of the 1920s that should not be forgotten.