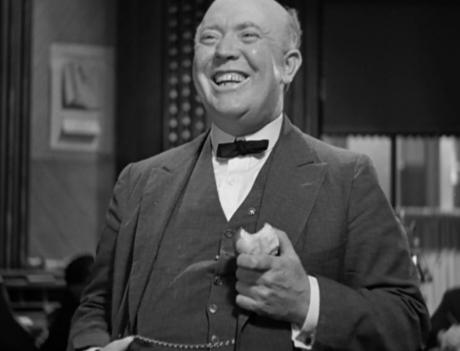 I think it’s safe to say that few of us have ever seen an American election year like this one. In November, the month this post appears, the bizarre campaign of 2016 will finally culminate in an election—and then we’ll have to deal with the aftermath. In all the turmoil, it may be easy to forget that there have been other colorful election years in American history, perhaps before we were born. Happily, we have classic films to transport us back in time and evoke the atmosphere of some of those earlier years, giving us a sense of the times.
History tells us that 1932 was a particularly contentious election year in America. As Franklin D. Roosevelt challenged Herbert Hoover for the Presidency, the nation was sharply divided over a host of issues, and those tensions were reflected in the movies. Warner Bros., the blue-collar working class studio, made no secret of its support for Roosevelt, openly extolling him both on and offscreen. And in the summer of 1932, just in time for the Chicago conventions, Warners (technically, First National) released one of my all-time favorite political comedies, The Dark Horse.
This film, depicting a fictional gubernatorial campaign in an unnamed state, has nothing to do with the Presidential race; instead it’s a wickedly funny take on American politics in general. Trying to choose a nominee for governor, the Progressive Party’s convention bogs down, deadlocked between two candidates. To break the stalemate, one faction nominates a dark-horse candidate from among the delegates—but their plan backfires, and the unknown actually becomes the party’s nominee. Party bosses soon realize that their new candidate is more (or less) than they bargained for: a hopelessly ignorant bumpkin who can’t do anything right. Guy Kibbee, a regular member of the Warners stock company frequently cast as bumbling older men, plays the title character with more than his usual vacuous stare and idiotic grin.
Saddled with this liability, the party has only one hope: a brilliant campaign manager. Enter Warren William, another Warners regular, who specialized in charming rascals. Here he’s a silver-tongued con man, as sharp as Kibbee’s character is dull, who will stop at nothing to get his man into office—in return for a hefty bonus. He has no illusions about Kibbee’s shortcomings (“Every time he opens his mouth he subtracts from the sum total of human knowledge”), but tackles this new challenge with gusto. He won’t try to conceal Kibbee’s stupidity; instead he’ll celebrate it, selling the new candidate as a simple, honest man of the people. “We’re going to convince the voters that at last they’re getting one of their own kind to represent them: honest and dumb!”
I’ll refrain from any inflammatory comparisons. In any case, in this film it’s the campaign manager who is firmly in control of the agenda. William’s antics on behalf of the party are priceless: coaching Kibbee in evasive answers to the press, helping him memorize a speech cribbed from Abraham Lincoln, posing him in one ludicrous photo op after another. The script is cowritten by the witty Wilson Mizner, whom I’ve mentioned before in this department, and whose colorful past probably included first-hand experience with crooked politics. The script, in turn, is based on an original story by “Melville Crossman”—i.e. Darryl F. Zanuck, one of the principal architects of the Warner Bros. house style, and a writer so prolific that he wrote under four different names. In short, The Dark Horse is vintage pre-Code Warners comedy: lively, fast-paced, uninhibited, cheerfully cynical.
There’s a subplot, too, involving William and the two women in his life: a very young Bette Davis as his romantic interest, and Vivienne Osborne—a player with her own specialty, conniving glamor girls—as his predatory ex-wife. The cast also includes a rich assortment of beloved character players: Robert Warwick and Charles Sellon as party officials, blustering Berton Churchill as the opposition candidate, hard-bitten Sam Hardy as the opposition campaign manager, Robert Emmet O’Connor in one of his patented tough-cop roles, and—in a brief, uncredited appearance—Wilfred Lucas, a familiar face from D.W. Griffith’s Biograph company of twenty years earlier, as a debate moderator. I don’t want to spoil the film for those who haven’t seen it, so I’ll avoid further details. But I can make this campaign promise with confidence: this is one election that is guaranteed to satisfy all the people.