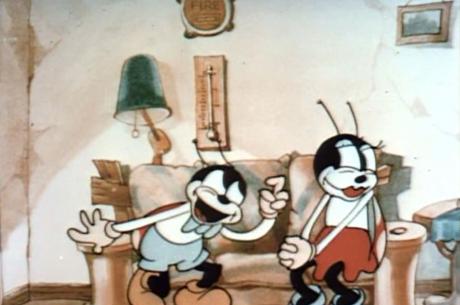 This month, September 2016, marks the reissue of Walt Disney’s Silly Symphonies, a book I cowrote with Russell Merritt. The first edition was published ten years ago and is now out of print, but this is a new edition with plenty of fresh material. Thanks to that, and our liner notes for the huge Silly Symphony Collection LP set last year, I’ve had my say about the Silly Symphonies—for the time being! On the other hand, it’s well known that the success of the Silly Symphonies in the 1930s prompted a surge of similarly titled series from other animation studios: Looney Tunes, Merrie Melodies, Happy Harmonies, Color Rhapsodies, and so on. Some of those cartoons are pretty fascinating too! So I’m indirectly saluting the Symphonies this month by taking a closer look at one of the many non-Disney cartoons that followed in their wake.
This particular cartoon is one of the early Merrie Melodies. No one could beat Disney at his own game, of course, but the Merrie Melodies enjoyed an advantage that was not available to the Disney studio. In composing musical scores for the Silly Symphonies, the Disney composers, working for an independent studio, were obliged to either write original music, borrow an occasional public-domain tune, or incur royalties for the use of copyrighted music. By contrast, the Merrie Melodies were produced for release by Warner Bros., and the cartoon makers were not only allowed, but encouraged, to use music from the Warners song-publishing catalog. That, indeed, became the defining trait of the Merrie Melodies during their early years: the studio supported the series as a medium for plugging songs from the live-action Warners musicals. Typically the title of the cartoon was also the title of its featured song, which was heard repeatedly on the soundtrack, its lyrics changed to fit whatever situation and characters the cartoon makers had cooked up.
I think Honeymoon Hotel (1934) is an excellent example of the formula. The title song had been introduced the previous year in the spectacular musical feature Footlight Parade. One of the least distinguished songs of one of the most distinguished songwriting teams, Al Dubin and Harry Warren, “Honeymoon Hotel” had served in Footlight Parade as a vehicle for a parade of leering pre-Code jokes about a young couple on their honeymoon. As adapted to a Merrie Melodie, it features a cast of insects. The romance between a boy bug and a girl bug leads them to the Honeymoon Hotel, where their romantic interlude becomes so “hot” that it literally sets the hotel on fire. In its appealing character design, its jaunty tempo, and its wealth of clever sight gags, Honeymoon Hotel distinctly suggests the early Silly Symphonies—and that’s no coincidence: director Earl Duvall and animators Jack King and Frank Tipper were all former Disney artists.
In fact, as Disney historian David Gerstein was the first to point out, the influence is even more direct than that. During his previous Disney stint, Earl Duvall had drawn “Bucky Bug” in a long-running continuity in the Silly Symphony newspaper comic strip. That continuity in turn had inspired the 1932 Disney short Bugs in Love, which included animation by both Jack King and Frank Tipper. By the time he came to direct Honeymoon Hotel at the Schlesinger/Warners studio in 1934, Duvall’s cast of bugs had an unmistakable Disney pedigree. Moreover, like the Disney bugs, these characters live in a “Bugtown” formed from a humans’ junkyard, with castoff human-size props repurposed to clever new uses on an insect’s scale. Here a steaming teapot houses a “Steam Laundry,” a thimble becomes a lampshade, and a fire engine is constructed from a cheese grater on wheels, with an alarm clock attached to the front sounding a furious alarm as the “truck” speeds on its way.
And as intriguing as the Disney connections are, the homegrown Warner Bros. elements in this cartoon are no less fascinating. In the early 1930s the studio made no secret of its upbeat support for FDR’s New Deal. Here, the rewritten chorus reveals that conditions are also improving in Bugtown: “Goodbye to Depression/Business here is fine!” More specifically, viewers familiar with Busby Berkeley’s original “Honeymoon Hotel” number in Footlight Parade may be surprised to see how closely the cartoon follows its live-action counterpart. In the feature, fellow hotel guests follow the couple’s progress with voyeuristic interest; in the cartoon, the hotel staff spies on them through the keyhole and over the transom. The feature includes smirking references to the high incidence of hotel guests named “Smith”; in the cartoon the newlyweds sign in by using a “Mr. and Mrs. Smith” rubber stamp! Even the ending of the cartoon is a loose parallel to the closing shot of the original production number.
As for the score, musical director Bernard Brown doesn’t stop with the prominently featured title song, but adds two more Footlight Parade numbers: the lovers paddle a peapod “canoe” down a stream to the strains of “By a Waterfall,” and the moon peeks at them through an open window while singing “Ah! the Moon is Here.” For good measure, one of their tender moments is underscored by “You’re Getting to Be a Habit with Me,” from 42nd Street. With so many points of interest, Honeymoon Hotel remains a delightful example of the way Warners seized on the musical-cartoon vogue of the early ’30s—and put its own unique stamp on it.