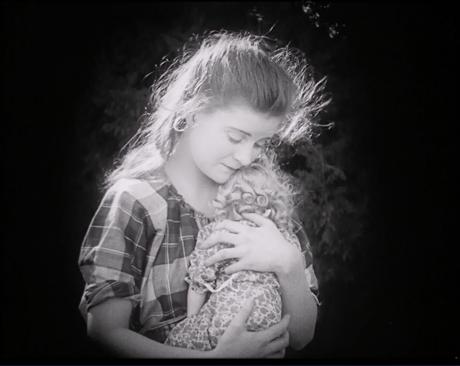 One of the most amazing things about director D.W. Griffith is the sheer volume of his output. Not only did he create the language of filmic storytelling, virtually singlehanded; not only did he produce some of the all-time landmarks of film history; but he turned out his films in quantities that seem incredible today. If he were responsible for nothing more than the films he directed—a body of work that encompasses hundreds of short Biograph films between 1908 and 1913 and a full complement of feature-length films from then through 1931—that would be a prodigious accomplishment in itself. If we factor in the additional films that he produced, the numbers are downright staggering. When the organizers of Le Giornate del Cinema Muto undertook the “Griffith Project”—an heroic effort to screen all the surviving Griffith films, both mainstream and marginal, in successive installments of their annual week-long festival—it took twelve years.
Hoodoo Ann is a “marginal” film that has always occupied an odd little niche of its own in the Griffith oeuvre. Nominally it’s a Fine Arts feature, one of the dozens of minor program pictures produced by Griffith’s company and directed by a subordinate staff director while Griffith himself was busy with the epic superfeature Intolerance. Scholars have debated the extent of Griffith’s direct involvement in these “side” films, but Hoodoo Ann has always been a special case.
For one thing, the scenario is credited to “Granville Warwick,” one of Griffith’s pseudonyms. More importantly, the film’s leading players are Mae Marsh and Bobby Harron, two of the most familiar faces in Griffith’s stock company during the mid-1910s. In fact, it’s clear that Hoodoo Ann is specifically designed as a starring vehicle for Mae Marsh, custom-tailored to her shy, awkward, innocent screen persona. As the little outcast drudge in an orphanage, she has one scene of pathos after another: excluded from the other children’s games, gazing in silent wonder at a doll (someone else’s), denied even the comfort of a goodnight kiss from the stern matron.
When Ann grows to young womanhood, it’s almost inevitable that she finds romance with Bobby Harron; Mae and Bobby were Griffith’s leading exponents of innocent young romance in the mid-1910s. He had first cast them together at Biograph in 1912, and they had exhibited such an unexpected appeal that he reteamed them afterward in film after film—most famously in the Modern Story in Intolerance. His enthusiasm is easy to understand; their romantic scenes are marked by a shy, tender warmth that is practically irresistible. One scene of special note in Hoodoo Ann is the couple’s first kiss. As Mae and Bobby work up to the kiss, they’re both so nervous that they can scarcely make eye contact. When the kiss itself finally occurs—an extremely brief and chaste endeavor—it occurs offscreen, an effective bit of staging that recalls some of Griffith’s far more famous screen moments.
And Hoodoo Ann offers other delights, including a trip to the movies. Silent films about silent films have a special interest for today’s enthusiast, and movie characters of the mid-1910s were often seen going to a local movie house. Here the characters attend a mock Western called Mustang Charley’s Revenge. The filmmakers take the occasion to poke gentle fun at other filmmakers: the players on the screen exhibit a broad, stilted acting style, in contrast to the naturalistic playing of Mae and Bobby, sitting transfixed in the audience. (At one point a title in the film-within-the-film announces that the villain takes “deadly aim straight at the heart of his enemy,” while the actor onscreen is seen firing a shot which, if genuine, would have missed its target by a good three feet!)
With so much going for it, what separates Hoodoo Ann from the bona fide Griffith films of this period? Ironically enough, the film’s biggest liability is that Granville Warwick scenario. The story of Hoodoo Ann is not a plot, per se, so much as a loosely connected series of situations. It certainly hasn’t the cohesiveness, let alone the dramatic heft, of the Modern Story in Intolerance; it’s essentially a collection of set-pieces designed to showcase the talents of Mae Marsh and Bobby Harron. But for many silent-film aficionados, that’s more than enough. Hoodoo Ann is available on an excellent David Shepard DVD (along with a far better-known Griffith pastoral romance, True Heart Susie), and is highly recommended. Its thin story is a small price to pay for a thoroughly charming minor effort by some major film talents.