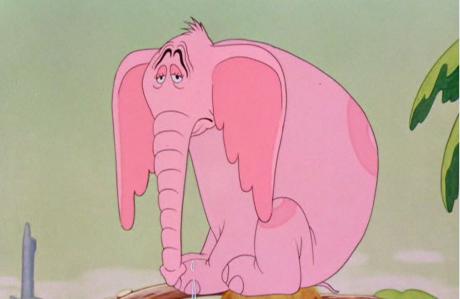 Some animation fans will probably disagree with me, but my favorite Warner Bros. cartoons are those produced between about 1937 and the mid-1940s. This, to me, was a peak period for the studio. During these years the personal directorial styles of the individual house directors—Tex Avery, Bob Clampett, Chuck Jones, and the rest—came into sudden and vivid focus, and coincided with the full flowering of the studio’s visual style. The result was a series of cartoons that included, I think, some of the studio’s best work ever. This month I’m singling out one of those classic cartoons: Horton Hatches the Egg, directed by Clampett and based on the Dr. Seuss book of the same name. This is not exactly an obscure title; Warner Bros. cartoon fans have known and loved it ever since its release in 1942. But it’s such an offbeat entry, so unconventional even for Warners, that I think it sometimes gets lost in the crowd and deserves a closer look.
A little context is helpful here. In the late 1930s and early ’40s, Theodor Geisel was building on his early success in magazine and advertising art and just beginning to launch his career as Dr. Seuss, author and illustrator of beloved children’s books. Horton Hatches the Egg, published in 1940, was only the fifth Seuss book, and in fact it would be the last until the end of World War II. In the meantime, Geisel busied himself with war-related work. But Horton and the other Dr. Seuss titles had already caused a sensation in the publishing world with their fresh, delightful ideas and illustrations.
Geisel’s writing/illustrating career is fairly well known, but it’s perhaps less widely recognized that he maintained a healthy relationship with the animation industry during these crucial years. His first two Dr. Seuss books, And to Think that I Saw It on Mulberry Street and The 500 Hats of Bartholomew Cubbins,were both snapped up by George Pal and produced as Puppetoons for Paramount. Geisel’s work on war-related films would include the scripts for some of the “Private Snafu” cartoons, produced by Warners for the armed forces in 1943-45. Geisel even had a fleeting Disney connection during these years. Historian Didier Ghez has recently uncovered some Random House correspondence which reveals that the storybook The Life of Donald Duck, published without a byline in 1941, was written anonymously by Geisel.
It was in this environment that Bob Clampett tackled the challenge of bringing Horton Hatches the Egg to the screen. It was no small challenge. “As of a Friday night,” Clampett later said to Michael Barrier and Milton Gray, “I told my animators, who were all struggling to draw Bugs Bunny alike, ‘Guess what, boys? First thing Monday morning I want you to all draw like Dr. Seuss!’” What is remarkable is that the animators not only met the challenge, but met it beautifully. Their drawings, adapted for the needs of animation, differ from Geisel’s style in some superficial details (the famous eyes with U-shaped pupils are nowhere to be seen), but Horton the elephant, Mayzie, and most of the other characters are unmistakably Dr. Seuss characters the moment we see them.
And, in fact, Horton Hatches the Egg can serve as a useful object lesson for anyone who adapts children’s stories to film. It’s absolutely true to the spirit of the original story, and yet makes full use of the properties of animated cartoons. As Jerry Beck and Will Friedwald put it in their essential reference book on the studio’s cartoons: “Clampett is able to inject his style, and contemporary Warner Bros. humor, and still remain faithful (100%) to Dr. Seuss.” One illustration in the book depicts the boat carrying Horton across the ocean, while a fish in the foreground leaps above the waves and watches in amazement. In Clampett’s film the fish becomes a caricature of Peter Lorre, who tells the audience, “Well, now I’ve seen everything,” and then shoots himself! Mayzie, the bird whose selfish laziness sets the story in motion, lapses twice into the obligatory Katharine Hepburn caricature, and carefree Horton is introduced singing the contemporary novelty number “The Hut-Sut Song.” When the three hunters sneak up behind Horton, the narrator tells us that their gun is aimed “right straight at his heart,” while onscreen we see the gun trained on Horton’s ample posterior. This is a characteristically ribald Clampett gag, but again, the same gag is suggested, if less explicitly, in Geisel’s original illustration.
And so it goes: time and again a Dr. Seuss idea is amplified by some gag or twist that fits comfortably into Clampett’s cartoon universe, without undercutting the charm or spirit of the original. Some touches, like the fanciful candy-colored jungle in which part of the story is set, seem out of character for either Geisel or Clampett, yet somehow happily appropriate in the context of this cartoon. The net effect is that of a harmonious collaboration between two major comic talents, and a delightful and sometimes overlooked gem from the Golden Age of animated cartoons.