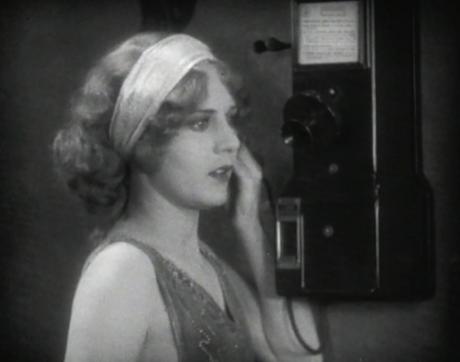 I’ve always been fascinated by the talking-picture revolution of the late 1920s, when sound films—which had always been tolerated as a novelty, but never embraced by audiences—suddenly and decisively took over the movie industry. We lost something precious when the silent cinema died, but we got a new and exciting replacement, one that had its own strengths and possibilities. And in between, for a couple of wildly chaotic years, we saw a transitional period as filmmakers struggled to adjust to the noisy new medium. The early-talkie period of roughly 1927–29 produced a great number of films that have questionable entertainment value today, but more than enough historical fascination to make up for it.
Lights of New York is remembered today for the wrong reasons, when it’s remembered at all. Mostly it’s remembered for Wheeler Oakman’s order to his gangland cohorts: “Take him for a ride!”—enunciated slowly and carefully, so that no one in the film or in the audience can possibly miss the point. I’m not going to defend Lights of New York as a cinematic masterpiece; I freely admit that the story is silly, the dialogue embarrassing, the acting mostly amateurish. But I have a real affection for this film, because historically it’s fascinating. For anyone who loves the movies, they are captured here at a significant turning point in their history, the vulnerabilities of early-talkie production unabashedly laid bare.
Historically, Lights of New York is usually distinguished as the first all-talking feature. I try to avoid the word “first,” but it’s true that this is a fully synchronized feature, as opposed to “part-talkies” like The Jazz Singer which had interspersed passages of synchronized sound with traditional silent sequences. This film was planned from the beginning as an all-talkie, but arrived at its feature-length distinction more or less by accident. Warner Bros. had been producing Vitaphone shorts for two years, recording not only musical performances and vaudeville acts but also short dramatic playlets. This film started production as one of the latter, a two-reel short with the working title “The Roaring Twenties,” but was gradually expanded during production. It emerged as a seven-reel feature, with synchronized dialogue scenes from beginning to end. Moviegoers, swept up in the talkie craze, eagerly flocked to the box office, and Lights of New York became one of Warners’ most successful films of the year.
The sound system in use here was the Vitaphone sound-on-disc system, Warners’ proprietary system in the late 1920s. The sound was recorded, and supplied to theaters, on 16-inch phonograph records, one disc per reel. During production, this recording method had the effect of anchoring the filmmakers in one place for long, dry stretches, filming and recording an entire scene in one uninterrupted take. (Actors who flubbed their lines were obliged to recover as best they could and simply keep going.) On the other hand, Vitaphone also allowed the filmmakers some flexibility: they could film with multiple cameras—covering the scene simultaneously from a variety of angles, all synchronized to the master recording.
Director Bryan Foy and his crew make ingenious use of this system in filming Lights of New York. Much of the film’s story takes place in a nightclub, with action (if that’s the word) shifting between the nightclub itself, the club office, and a passageway in between. Sets for all three locales were constructed side by side on the sound stage, and microphones were strategically placed in each set—sometimes hidden inside telephones or other props. Cameras, too, were placed for maximum effect. In constructing the final cut, the editor had the choice of switching between long shots, closeups, and alternate angles, breaking up the effect of long, static takes. In some cases the visuals were further varied with silent inserts—a hand holding a gun, assorted reaction shots—cut into the continuity without breaking the synchronization of the dialogue scenes.
As if all this were not intriguing enough, Lights of New York in hindsight is a harbinger of things to come. The story functions as both a (rudimentary) gangster film and an (even more rudimentary) musical—two genres that Warner Bros. would come to dominate within a few short years. As for the cast, Helene Costello and Cullen Landis as the leads may be instantly forgettable, but sixth-billed Robert Elliott and seventh-billed Eugene Pallette capture the attention with previews of their future careers. In 1928 Elliott already had a history in silent films, but his police detective in this film—his threatening toughness barely concealed by unhurried movement and a slow, soft-spoken drawl—is a blueprint for the characters he would play in numerous talkies from this time on. Eugene Pallette had an even richer history in the silents, notably as the romantic young leading man in the French Story in Griffith’s epic Intolerance. But in Lights of New York audiences could hear that wonderfully unique gravel voice of his, and got an introduction to a new persona that would make him one of the movies’ most beloved character actors for the next two decades.