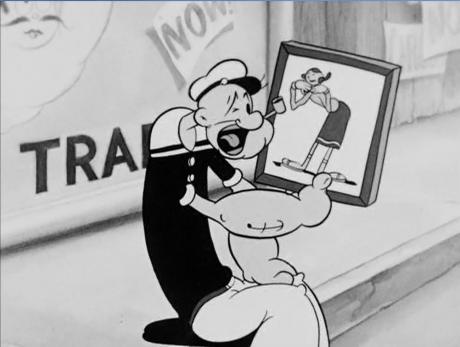 In the Frank Capra classic It Happened One Night (1934), there’s a famous scene in which the passengers on a bus spontaneously join their voices in singing “The Daring Young Man on the Flying Trapeze.” The song, attributed to British music-hall entertainer George Leybourne, had been around since the 1860s, but was enjoying a resurgence of popularity. After this engaging performance in It Happened One Night, it became a hit song all over again.
Among other things, its new vogue was reflected in further movies. Short subjects, including the Vitaphone short Show Kids and the Our Gang comedy Mike Fright, featured juvenile performances of the song. Dick Powell, as a singing waiter in Twenty Million Sweethearts, was “discovered” while singing it and subsequently became a radio star. One of W.C. Fields’s classic Paramount comedies, released in 1935, was The Man on the Flying Trapeze—although, characteristically for Fields, the title had nothing to do with anything in the film.
But in the spring of 1934—less than a month after the Capra film, and more than a year before the Fields—Paramount had already released another film with the same title. This one was a short subject, a Fleischer cartoon featuring Popeye the Sailor. And, alone among all these films, it actually depicted a man on a flying trapeze!
This charming short, not one of the better-known Popeyes, is nevertheless highly recommended as an example of the wit and ingenuity that went into the series. The Popeye cartoons have sometimes been criticized as formula pictures, little more than mindless slugfests between Popeye and some hulking opponent (usually Bluto). Cartoon fans, and especially Fleischer enthusiasts, know better: Popeye’s adventures came to the screen as a series of wildly inventive situations, punctuated by offbeat gags, and pictured in delightfully bizarre, sometimes surreal animation.
The Man on the Flying Trapeze is a case in point. Its opening scenes picture Popeye piloting a giant ocean liner through the waves. The ship reaches port—and sails right onto dry land, plowing its way up a city street, towering over the surrounding buildings. It reaches its destination, and Popeye drops anchor, calmly hops down onto the street, and goes about his business. This, I think, is the Fleischer cartoon universe at its best: the utterly fantastic, presented in a spirit of casual fun.
Popeye has come to see his girlfriend, Olive Oyl, but Olive isn’t home. And now the short becomes a cartoon operetta: Olive has run away with a trapeze artist, and her mother (landlady?) relates the story to Popeye by singing a chorus of “The Man on the Flying Trapeze.” From this point on, everything in the film moves to the rhythm of the title song. Popeye, dejected, walks away and pours out his troubles to three sympathetic neighborhood urchins by singing the verse.
On a technical level, too, this short has much to recommend it. The seagoing scenes at the opening are worth a second look; they display some economical but evocative water effects. Popeye himself, having originated in the newspaper comic strip “Thimble Theatre,” is making only his ninth appearance on the screen. Here, animated principally by Willard Bowsky, he already displays a good-natured, whimsical personality quite distinct from that of his newspaper counterpart. In the climactic scenes (and it surely can be revealed here, without spoiling any surprises, that Popeye does confront the trapeze artist on his own turf) there is a show of fisticuffs, but it’s handled with a droll wit. In one hilarious piece of animation, the two combatants face each other on opposing trapezes. They swing toward each other, each in a slow, graceful arc—then come within arm’s reach and exchange a swift flurry of blows—then serenely swing away again in opposite directions.
For years the Fleischer Popeye library was unavailable for viewing, tangled in a mass of competing copyright claims. Finally, in 2007-2008, the combined efforts of several individuals (notably animation historian extraordinaire Jerry Beck) resolved the issues and made the entire series available in a series of essential DVD collections. Thanks to their efforts, we have the luxury of rediscovering this animated gem—and dozens of others—for ourselves.