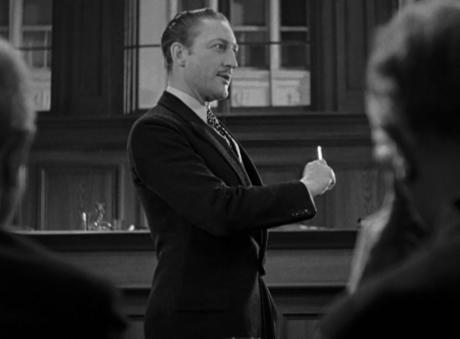 To those of us who love American movies of the pre-Code years, Warren William is a familiar face. William crashed the movies in the early 1930s and, after a few desultory supporting roles, blossomed suddenly in 1932 with a character type perfectly suited to the times. Magnetic and forceful he was, with a gift for ringing, eloquent speech—but also with a wolfish twinkle that suggested he was just sleazy enough to operate on both sides of the law at the same time. It was a persona tailor-made for William’s talents and for the Depression-ridden early ’30s. We’ve observed some of his performances in earlier editions of this column, but the vehicle for his breakout performance was Warner’s The Mouthpiece, released in the spring of 1932, with William in the title role as a decidedly colorful lawyer.
Like many pre-Code protagonists, William’s character in The Mouthpiece starts out well. We see him first in the courtroom, a principled prosecutor unleashing his gift for oratory against a murder suspect he believes to be guilty. The jury duly convicts the suspect and sends him to the electric chair. Unbeknownst to William or anyone else, the man is actually innocent—but the proof of his innocence comes to light only on the day of his execution, and his reprieve reaches the death house just seconds too late to save his life. William is tormented by his conscience and vows to give up the law.
But a few words from bartender Guy Kibbee—“The guys who really pay off big are the guilty ones! … They gotta have lawyers, and if you don’t defend them, someone else will!”—are enough to change his mind. Seemingly overnight he takes up his law practice again, but in a very different way. Now he’s a defense attorney for notorious felons, employing his rhetorical gifts to protect crime kingpins and small-time hoods alike from the consequences of their actions. “Sensationalism, ballyhoo, Barnum and Bailey … give ’em a swell show and they won’t even stop to think,” he tells an associate, and illustrates his point with outrageous courtroom tactics which, in today’s legal world, would get him disbarred in a matter of minutes. He consorts with the police and with the underworld, displays a reckless disregard for ethics, and rides roughshod over juries, legal norms, and his own clients. He also enjoys a lavish, womanizing lifestyle. When a new typist in his office (Sidney Fox, in one of the few performances of her short-lived film career) turns out to be woefully incompetent at her job, but does project a winsome, innocent charm, William responds with a predatory leer and moves in for conquest. And yet—all this notwithstanding—his character is not entirely beyond redemption.
Pre-Code cinema abounded in shady lawyer characters, but Warren William’s character in The Mouthpiece is a singular example. In 1932 he was widely understood as a veiled representation of William J. Fallon, the real-life “attorney of the damned” who had similarly used his courtroom skills to win acquittals for high-profile criminals. To be sure, Warners took care to distance their character from Fallon’s real-life exploits. Fallon’s most notorious client had been Arnold Rothstein—not a murderer or embezzler like the Mouthpiece miscreants, but a white-collar crime boss on trial for fixing the 1919 World Series. Perhaps the fictional attorney in the film was linked with the authentic figure simply by the film’s title; Fallon had long since been dubbed “The Great Mouthpiece” by the contemporary press. Whatever the case, the connection was so universally accepted that Warners was sued by Fallon’s son (Fallon himself having died in 1927) for libel. The case was quietly settled, and Warners went on to remake the film twice.
Besides serving as a showcase for Warren William’s talents, The Mouthpiece features performances by other stalwarts of the Warners stock company. Aline MacMahon, cast in one of her thankless girl-Friday roles, pulls it off with her usual grace and lends unaccustomed sympathy to the story’s protagonist. Morgan Wallace is a portrait of rage as an investment banker whom William casually extorts in one scene, and the lawyer’s underworld associates include such reliable tough guys as Ralph Ince (playing a crooked bail bondsman called “J.B.”, but I don’t take it personally) and an unbilled Jack La Rue, as ruthless as ever in the role of a small-time thief. Beyond all this, The Mouthpiece pulses with the single best quality of pre-Code movies: a raw, vivid immediacy that unmistakably captures the atmosphere of its time. It’s this quality that brings us back again and again to the films of that vital period, and The Mouthpiece is one of the best.