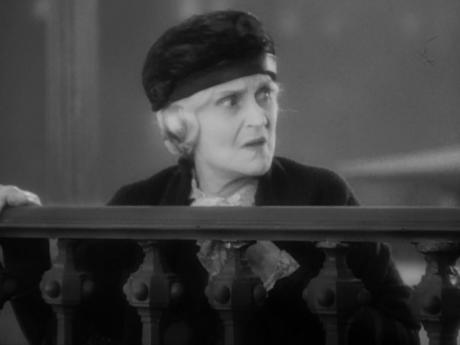 May is the month of Mother’s Day and Memorial Day, and I think it’s appropriate to revisit a John Ford classic that is relevant to both holidays. Pilgrimage is not exactly an obscure film, one of the usual criteria for this column—Ford’s devotees recognize it as one of his best efforts—but it’s not one of the director’s better-known works, either. In fact it’s a highly unconventional film, not only in Ford’s canon but in the larger scheme of film history.
To begin with, the central character in the story is a mother who is very close to her grown son—but this is no warm, sentimental stereotype of motherhood. On the contrary, this rural mother is a hard, mean-spirited woman whose affection for her son is fiercely possessive. When he falls for a local girl, the mother is so embittered that she volunteers him for the army—sending him into harm’s way, rather than allow him to marry the girl. The U.S. is just entering World War I, and the son is sent to France and killed in combat. Shortly afterward his child is born, and the mother reluctantly helps to deliver her grandson but afterward refuses to acknowledge him. Ten years pass, and the government mounts a special effort to send Gold Star mothers and widows to Europe on a pilgrimage to their sons’ or husbands’ graves. (This is historically authentic; the government did enact such a program in 1929, and it was still in progress at the time this film was produced.) The boy’s mother, by now thoroughly withdrawn into a shell of bitterness, is persuaded (again reluctantly) to make the trip, where an unexpected experience is awaiting her.
For the benefit of those who have not yet seen the film, I’ll stop there. The point is that this story, which might have been unbearably sentimental, becomes genuinely moving in Ford’s hands. Time after time he undercuts our expectations by treating key story points, not with emotional excess, but in a quietly thoughtful style characteristic of his best films. The script, too, is frank but disarmingly subtle. One of the writers was Ford’s frequent collaborator Dudley Nichols, and here the serious nature of the story is balanced by lighter moments, and even a few instances of broad comedy. Another familiar colleague was cameraman George Schneiderman, a seasoned craftsman who had worked with Ford, off and on, for more than a decade at this point. He enhances the story with visuals that are eloquent and evocative, but quietly unobtrusive.
A character-driven story like this could never succeed without a topnotch cast, and the Pilgrimage cast is exceptional. The hard-hearted mother is played by Henrietta Crosman, a veteran actress usually seen in supporting roles. Here she essays the leading role and turns in a masterful performance, not as a one-dimensional harridan but as a complex, nuanced human being. Short of temper and sharp of tongue, she nevertheless betrays subtle moments of vulnerable humanity that make the later passages of the story doubly moving.
Other players, too, are worthy of note. On board the ship to France, Crosman is befriended by another rural woman played by the great Lucille La Verne. Today La Verne is probably best remembered as the hag in Griffith’s Orphans of the Storm and as the voice of the witch in Disney’s Snow White, but in fact she enjoyed a long and distinguished career on both stage and screen, and gives a fine performance here. Robert Warwick, seen here in a minor role as the officer who shepherds the Gold Star mothers on their voyage to France, had been a leading man in the silent era. By the 1930s he was appearing in supporting roles, to which he invariably brought a sense of restraint and dignity. Similarly, a decade earlier Betty Blythe  had been the glamorous star of The Queen of Sheba and other films. Here she can be seen briefly as an organizer of the pilgrimage.
And no Ford film would be complete without appearances by the character players, often unbilled, who were familiar members of Ford’s “stock company.” A generous complement of them are on hand here, including Francis Ford, John’s older brother, once a director/leading man himself. Here, notably, Francis is not cast as a comic drunk, but as the mayor of Crosman’s little town, who badgers her into taking the voyage.
Pilgrimage may be relatively underappreciated today—certainly less appreciated than it deserves—but it is recommended without reservation. To those who have seen it before, it will be the renewal of a treasured acquaintance; for those seeing it for the first time, a profound cinematic experience is in store.