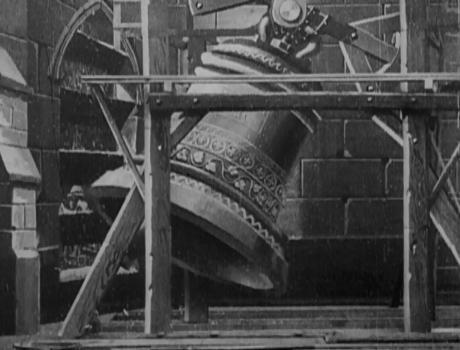 Last December I selected one film, out of the hundreds produced by the pioneer French filmmaker Georges Méliès, as a special treat for the holidays. Now another holiday season is upon us, and as we all revisit our favorite classic Christmas films, I’m reaching back into the Méliès catalog for another delightful gem to brighten the season. This one, in fact, is specific to the season: Rêve de Noël (shown in the U.S. as A Christmas Dream) is a split-reel film that uses its short running time to showcase a range of Christmas themes, both sacred and secular. Given the constraints of moviemaking in 1900, it’s an ambitious undertaking; in effect, a capsulized pictorial review of the joys of the season packed into a few minutes. As the American distributor’s advertising put it: “The entire story of Christmastide is here depicted.”
Méliès produced such a staggering number of short films during his career that it’s easy for the viewer to be overwhelmed by the sheer volume of his output. Confronted with a seemingly endless flood of clever invention and innovative technique, the eye becomes saturated and we may fail to appreciate individual films for their true worth. But singling out one film and savoring it in detail (the theme song of this column) allows us to derive the full measure of enjoyment from it. Rêve de Noël—still, in 1900, very much a part of the “cinema of attractions”—opens with a nursemaid putting two children to bed on Christmas Eve. From there we proceed to a Christmas-pantomime celebration, complete with a group dance; a fantasy rooftop tableau, with angels helping to distribute toys to children by way of the chimneys; a church, where a quartet of boys strain mightily to toll the giant bell, and the first worshipers begin to arrive; and a sumptuous banquet, attended by wealthy guests who also invite a poor street beggar to join them. On Christmas morning we return to the bedroom where we started, as the children—who may have dreamed this entire spectacle; we’re free to interpret the images as we choose—wake to find the gifts that Santa (or Père Noël) has brought them. The film concludes with a summary holiday dance, capped by the magical appearance of a Christmas tree in the midst of the dancers.
Most of Méliès’ films invite repeat viewings, and this one is no exception; the more closely we look, the more details we discover. Among other things, the Christmas-pantomime dance includes a notable oddity. One of the dancers, costumed as a jester—likely Méliès himself, who often did appear onscreen in his own films in various guises—performs an energetic solo, dancing so vigorously that he dances out of one of his decorative shoes. The shoe remains in the center of the stage, and the other dancers are obliged to work around it. As the formation continues through its paces, the jester returns to retrieve the shoe—but as he bends over to pick it up, one of the other dancers brushes against him and knocks off his large hat, and now the hat remains in place on the stage! Evidently no retake was made; this little accident remains in the film and may seem to illustrate the appealingly impromptu nature of early filmmaking.
But, I suggest, it actually indicates something else. All the scenes in Rêve de Noël are linked by cross-dissolves, an effect that we may take for granted today, but which was an eye-catching novelty in 1900, pioneered by Méliès himself. At this date, decades before the invention of the optical printer, such dissolves were necessarily performed in the camera. This means that all of this picture would have been photographed on one continuous strip of film, and must have called for meticulous preplanning. Once the first scenes had been photographed and the first dissolves were in place, there was no turning back. Méliès and company would have exactly one chance to film each scene in this little pageant, and if any mistakes occurred, retakes were not an option. That shoe at center stage, far from indicating a careless or slipshod filmmaker, is actually a testament to the pains Méliès took in crafting this and his other films.
And, of course, it’s only one detail, easily overlooked in the parade of imagery we see here. The scene in the street outside the banquet hall, with holiday travelers bustling back and forth under a shower of falling snow, may seem to suggest an unmistakably Dickensian flavor—though it was filmed in France, thirty years after Dickens’ death. And the lovely vignette of the rooftop angels has an ineffable charm, characteristic of so much of Méliès’ work, that makes it a highlight of the picture. All in all, this unassuming little film amounts to a sweet Christmas gift from Méliès to the viewer, no less delightful after an interlude of well over a century. And the viewer who enjoys it by way of the Flicker Alley Méliès anthology has the added pleasure of seeing it accompanied by Donald Sosin’s piano score. Joyeux Noël!