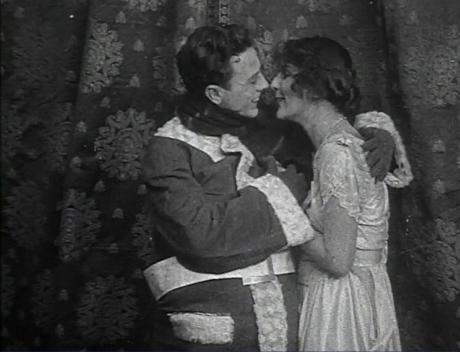 Once again the arrival of December brings with it the joys of the Christmas season—including the joy of Christmas movies! It’s always a pleasure to revisit the well-established holiday classics like The Bishop’s Wife or Miracle on 34th Street. But of course that’s only the tip of the holiday iceberg; a vast quantity of Christmas-themed films has been produced over the years. For the film enthusiast, there’s a different kind of pleasure in discovering the less established films of the season, forgotten and obscured by the passage of time. The early years of cinema provide a particularly rich source for these delicacies. During the nickelodeon era, when the usual picturegoing experience was a program of one-reel or split-reel films, each December brought a fresh selection of films celebrating Christmas—some serious, some lighthearted, some spiritual, but all contributing to the warm spirit of the season.
Released in December 1915, Santa Claus vs. Cupid is a little late to qualify as “early cinema”—but, like most of Edison’s contemporary output, it continues in the pattern of those earlier films. It tells its intimate story in the space of one reel, and its cast is drawn from the current Edison “stock company.” These players would have been known to regular moviegoers in 1915, but are largely unfamiliar today, even to silent-film aficionados (although Raymond McKee did extend his film career well into the 1930s). Easily the most notable name associated with Santa Claus vs. Cupid is that of Alan Crosland. Today Crosland is remembered as a top director of the 1920s, but to this 1915 film he contributed the scenario.
And, in fact, the scenario is the most remarkable ingredient in Santa Claus vs. Cupid. This may be a one-reel film, but Crosland packs into that short running time a wealth of plot and incident that could sustain a much longer film. The story begins as a light romantic comedy (as the title might suggest), with McKee and Billy Casey as friendly rivals for the hand of Grace Morrissey. Each of them is prepared to win her affections by fair means or foul; and, through a series of misunderstandings, both of them—unbeknownst to each other—are separately invited to play Santa Claus at her Christmas party. The stage is set for further comedic misunderstandings, as the film alternates between the two suitors, their schemes against each other, and household preparations for the party.
But another plot thread is developing at the same time, involving a poor cab driver. Here the story takes a very different tone: the driver is shown worrying about his sick wife and about the bleak Christmas awaiting his children—sad thoughts that are underscored when he finds the children’s letter to Santa, crumpled and stuffed in his coat pocket. This part of the story is played absolutely straight; the cabby’s plight (and the character’s colorful name, “Binks Mulligan”) might have appealed to Dickens. And before film’s end, the cab driver’s story will interact directly with that of the three protagonists, in a way that ends happily for nearly all of them.
With almost reckless extravagance, Crosland crams all this story material into one reel and challenges us to keep up with it. It’s been observed elsewhere that early cinema made singular demands on its viewers. Nickelodeon audiences, having developed a practiced eye by 1915, seem to have followed this profuse narrative with no difficulty, but today’s viewer may want to watch the film several times in order to catch everything.
And it’s a film that rewards repeat viewings, offering little nuances of humor or technique that may have escaped notice the first time. 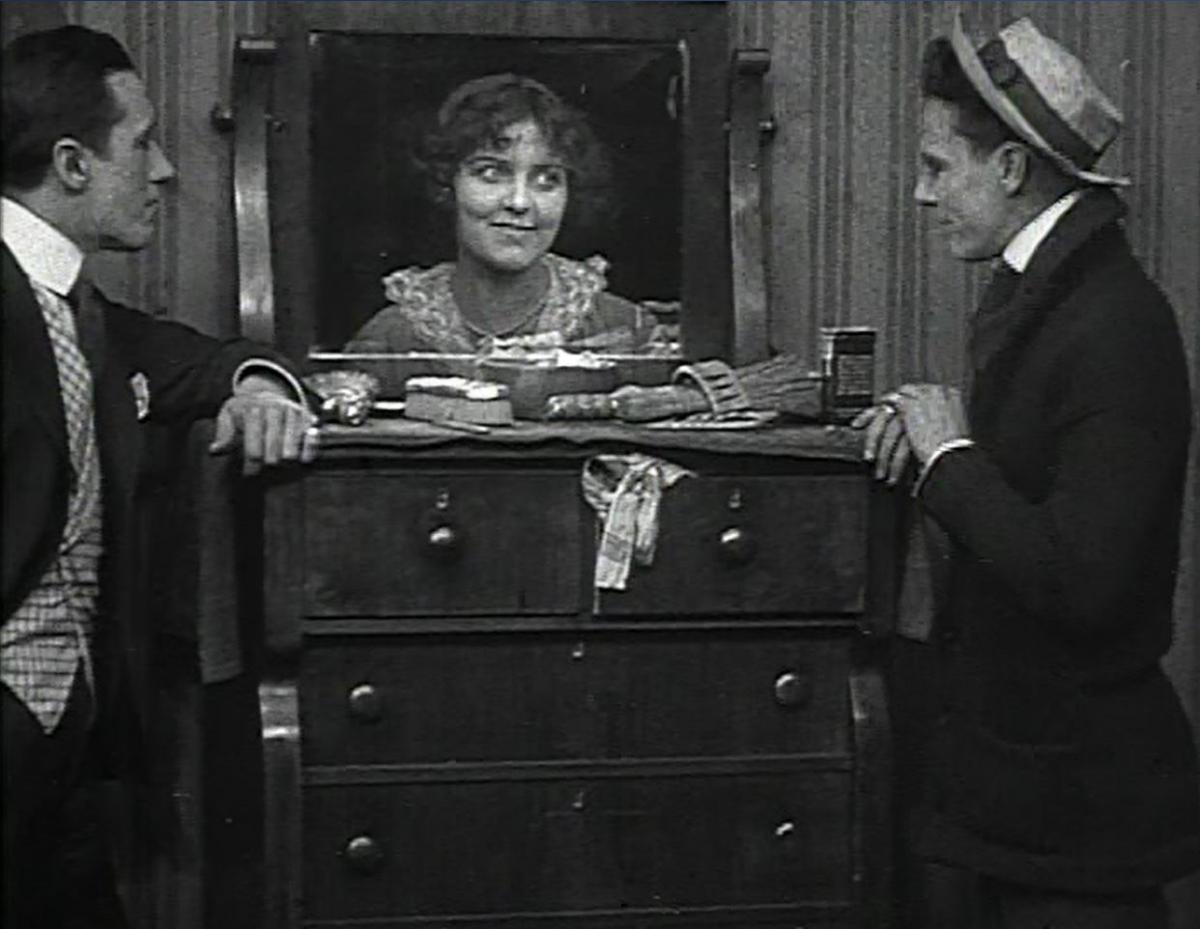 It’s pleasing to see Crosland and director Will Louis, at the opening of the film, solving a problem of plot exposition in a purely cinematic way. How to convey, without wasting precious footage, the idea that McKee and Casey are romantic rivals, and that Grace already has a preference for one of them? Crosland and Louis accomplish this task gracefully in a single opening shot, a model of economy: Casey and McKee are shown standing before a bureau mirror. As they watch, a symbolic vision of Grace dissolves into the mirror. She looks from one to the other, her feelings are unmistakably clear—and, the point made, the narrative proceeds.
Santa Claus vs. Cupid makes no claim to cinematic greatness. It is, to be sure, a trifle, one of dozens that celebrated the season during those formative years of cinema. But it’s such a pleasant trifle, and combines so many of the expected qualities of a Christmas film into its short running time, that it suggests something of the rich store of holiday treats still awaiting us in the world of early film.