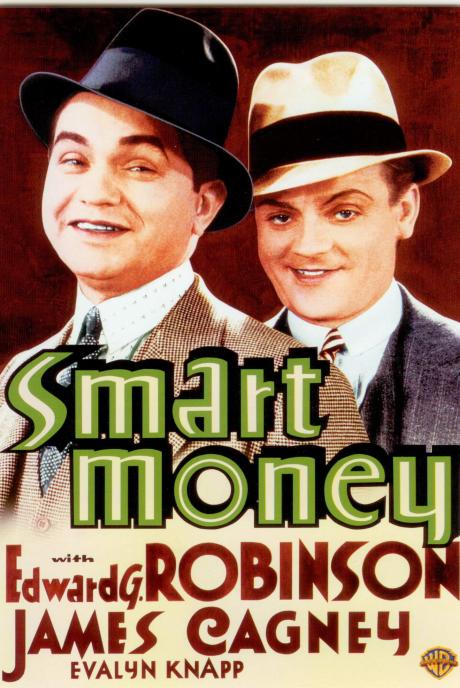 Like many film enthusiasts, I have a special affection for the Warner Bros. films of the early 1930s. There’s something irresistible about the Warner house style during those Depression years: a tough, gritty, street-level energy that still remains as fresh and vivid as ever. When we think of early-30s Warner Bros. today, many of us tend to think first of the crime films—and, more often than not, even that general category is often boiled down to the studio’s two outstanding hits of 1931: Little Caesar and The Public Enemy. And not without reason; both of those pictures remain powerful, indelible classics of the screen, perhaps the all-time definitive gangster films.
But of course, if we take a closer look, there’s far more to the Warners crime genre than that. For every textbook classic, there are many more smaller-scale, lesser known program pictures that also make rewarding viewing today. One of my favorite examples is Smart Money, another 1931 entry. Produced just after the two earlier blockbusters, it features the stars of those two films—Edward G. Robinson and Jimmy Cagney, respectively—enterprisingly cast together in the same picture.
Strictly speaking, Smart Money is not really a crime film. Its leading characters do skirt the limits of the law throughout most of the story, but they’re not the out-and-out gangsters that Robinson and Cagney had played in their breakout hit films. Still, they are Robinson and Cagney, they still project the same electrifying screen presences that had so recently made them stars, and they still fit comfortably into the tough, quasi-underworld setting that we’ve come to expect from these pictures. The screenplay of Smart Money is the work of Kubec Glasmon and John Bright, authors of the brilliant Public Enemy screenplay (and is based on an original story, by Lucien Hubbard and Joseph Jackson, that was itself nominated for an Academy Award). Quiet, understated, and worldly-wise, Smart Money leans away from violent action in favor of atmosphere and engaging characters.
One of the joys of classic films is their time-capsule effect: they give us the vivid sense of a time very different from our own. This film gives us a concentrated dose of the time-capsule effect, reflecting not just the year 1931, but a specific moment in 1931. Produced after Little Caesar had scored its sensational success at the box office, Smart Money is clearly an Edward G. Robinson vehicle from beginning to end, with Cagney cast in a prominent but secondary role. Produced even a couple of months later in 1931, with Public Enemy enjoying its own resounding success, this film might well have reversed itself and given the top spot to Cagney. As it is, both stars give enjoyable performances, but Robinson easily carries the picture. As Nick “the Barber” Venezelos, a small-town gambler who goes to the big city, he’s cocky and overconfident, yet subtly vulnerable—an appealing variation on the hotheaded egotist he had played in Little Caesar.
The time-capsule effect can also be seen in another performance. Today it may seem counterintuitive to imagine Boris Karloff as a gangster, but in fact he played gangster roles more than once in the early 1930s. In Smart Money he has a memorable cameo as an underworld tough guy who makes the mistake of crossing Robinson in an early scene. By the end of 1931, following his spectacular breakthrough in Frankenstein, Karloff had effectively identified himself with a very different kind of role.
And the intriguing bits of casting don’t end there. Noel Francis, usually restricted to brief appearances as glamorous window dressing, has an extended role in Smart Money and, ultimately, turns in a rather touching performance. Margaret Livingston, best remembered as the temptress in Murnau’s Sunrise, was still active in the early years of sound and has a cameo of her own in this film. Veteran character player Charles Lane, who would be seen in literally scores of films, makes one of his first appearances here as an officious hotel desk clerk. And Gladys Lloyd, Edward G. Robinson’s wife at the time, could be glimpsed in bit parts in several of her husband’s films—including this one, in which she appears briefly as a cigar-stand clerk.
These are only a few of the delights to be found in this unassuming little feature. Another is its lively but relaxed tempo, some scenes seemingly improvised while the camera is rolling. In one scene, Cagney and Robinson carry on an entire conversation in pantomime without uttering a word—a pleasing and apparently spontaneous touch. All in all, Smart Money adds up to a hidden gem, one of many to be found in this rich period of Hollywood history.