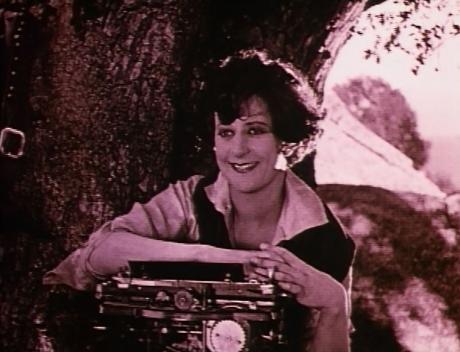 The late William K. Everson, one of the true giants of film history, once devoted one of his “Rediscovery” columns to producer-director-star Nell Shipman, offering intriguing descriptions of some of her surviving films. It’s hardly my place to presume on Everson’s territory—but it’s been more than 25 years since that column appeared, and by now I think it’s appropriate to return for a second look at one of the films he described. Among the new developments since Everson’s day is a highly recommended Milestone DVD that puts the film within reach, giving far more of us an opportunity to see it for ourselves. And anyway, I just like the idea of starting the new year with a film called Something New!
Widespread appreciation for Nell Shipman’s career has seemed to wax and wane over the years. I gather it’s presently enjoying a resurgence, with current developments including a feature documentary in the works. For those who are unfamiliar, Nell Shipman is a colorful and worthy subject for rediscovery: a writer, producer, director, actress, animal-rights activist, and, from all accounts, an adventurous free spirit who flourished during the late 1910s and early ’20s. It’s well known that the silent era saw an unparalleled number of women directing, supervising, and occupying other positions of power in the film industry—but even in that context, Ms. Shipman stands out. Capitalizing on her early writing and acting success in major studio productions, she formed her own independent film company to star herself in the kind of films she wanted to make: rip-roaring adventure tales, often set in the far North. Her cameraman, Joe Walker, was the same Joseph Walker who would later photograph so many classic films in the 1930s and ’40s for Frank Capra and other directors.
Something New is an anomaly in its own right, set not in the frozen North but in the wilds of Mexico. Reportedly Shipman had been approached to produce a film advertising the new Maxwell automobile. Everson speculates that the company had been expecting a one-reel commercial; instead, Shipman and her crew produced a highly unconventional feature-length Western. This is a film that falls into no convenient category. It’s an advertising film, but one unlike any other; it’s a Western, but one in which the hero rides to the rescue in an automobile! The basic story, concocted by Shipman and her partner/leading man Bert Van Tuyle, is red-blooded adventure, but produced in a lighthearted spirit of fun. This is a subtle balance that frequently appeared in action films during the silent era; the excitement is never undercut by heavy-handed parody (as it might have been in a later film), but is produced with a light touch and slangy, conversational intertitles that signal us not to take it all too seriously. To make the point unmistakable, Shipman concocts a comic framing story with herself as an author, suffering from writer’s block. Inspired when she happens to witness a race between a horse and an auto, she pounds out the story that forms the main narrative—then returns, laughing, to rejoin the audience and wrap up the proceedings at film’s end.
And, it must be said, the Maxwell auto does turn in an amazing performance as one of the “stars” of the film. If the filmmakers’ object was to show off the Maxwell’s rugged durability, Something New delivers the goods: the little car is seen fording streams, plowing through fields of wild sage, and negotiating mountainous, rocky terrain that would challenge a sure-footed horse. The extended chase must be seen to be believed, and it’s all accomplished without any camera fakery whatever. We’re told that a second “backup” car was kept in readiness throughout production, and that the filmmakers did cannibalize the second car for spare parts when their principal vehicle was battered in the course of shooting—but even when we’re aware of that background, the little car’s endurance is quite impressive.
Something New is not the most celebrated of Nell Shipman’s films, but for those unfamiliar with her and her work, it makes a pleasant introduction. And for film enthusiasts in general—whether seeing it for the first time or not—it’s a breezy, delightful experience, the perfect energy supplement to launch a new year.