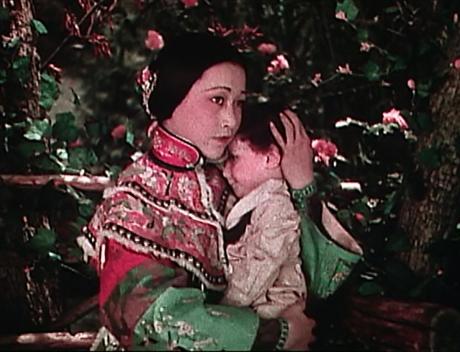 The month of October has a special significance for film enthusiasts: it’s the month of Le Giornate del Cinema Muto, the international silent-film festival held annually in Pordenone, Italy. For eight days, visitors to this lovely northern Italian town are immersed in a luxurious bounty of silent films from the world’s leading archives. The festival is invariably a rich banquet for anyone who loves the silents, and the program for October 2014 promises to be one of the most generous ever. One intriguing retrospective this year is devoted to the upcoming centenary of Technicolor in 2015. With their customary thoroughness, the Giornate management will present a selection of Technicolor silents, many of them extreme rarities. I won’t be present this year, but in honor of this retrospective I’m singling out a film that should be one of the highlights of the program: The Toll of the Sea.
This film is not exactly a rarity—at least, not any more—but it’s one of my favorite examples of the miracles that can take place in the world of film preservation. The Toll of the Sea was once considered out of reach, and the notion of actually seeing it seemed only a fantasy. Then, in 1985, the UCLA Film Archives, working with YCM Labs and other partners, painstakingly resurrected the film from the precious original camera negative. Now it is not only archivally preserved in viewable form but, thanks to the National Film Preservation Foundation, readily available on DVD!
Restored to view, the film is fascinating in more ways than one. The Toll of the Sea was produced in one of the two-color (red and green) processes that Technicolor used during the 1920s and into the early sound period. After the company introduced its three-strip process in 1932, making a full range of rich colors available on the screen, the earlier two-color systems were generally regarded as inferior. In fact, the limited palette of two-color Technicolor has a unique charm all its own. In the hands of a skilled cameraman, it could produce some delicate pictorial effects. The Toll of the Sea is designed to take full advantage of that haunting illustrative quality. The story, an undisguised Chinese variant of Madame Butterfly, is slight, ­and clearly just a vehicle for scenes that exploit color: scenic gardens, bright costumes, waves crashing against rocks. Art titles—expository titles enhanced with thematic or decorative paintings—were already a fixture in American films by 1922. In The Toll of the Sea the art titles have the added appeal of color, complementing the pleasing overall effect of the film.
And the film has much more going for it. For many viewers, one highlight is an early starring role for Anna May Wong, the most celebrated Chinese actress in golden-age Hollywood. Today’s film enthusiasts know Anna from such classics as The Thief of Bagdad and Shanghai Express, but this film affords us a look at her career beginnings, playing a starring role while still in her teens. She’s certainly the most notable member of this cast, although Kenneth Harlan, a stock leading man who appeared in scores of films throughout the silent and sound years, does the best he can with an unsympathetic role.
There’s plenty of talent behind the camera, too, including director Chester Franklin (less celebrated than his brother Sidney Franklin, but nevertheless a solid talent in his own right) and Frances Marion. Perhaps especially notable is the cameraman, J. Arthur Ball (the titles credit him for “photographic direction”). Ball was one of the technicians who had originally developed Technicolor, and as the years passed he continued to experiment and search for ways to improve the process. In 1938 the industry would honor him with a special Academy Award “for the advancement of color photography.”
In 1922, when The Toll of the Sea was produced, the Technicolor company was actually operating as a movie studio—a small production company specializing in color films. Shortly afterward the company embraced a more collaborative role, contracting with existing studios to provide its service for their pictures. For decades afterward, major studios continued to produce films with “color by Technicolor.” The Toll of the Sea is a fascinating landmark in that early history, and we’re doubly fortunate—and indebted to the film-preservation community and to festivals like the Giornate—to be able to see it for ourselves.