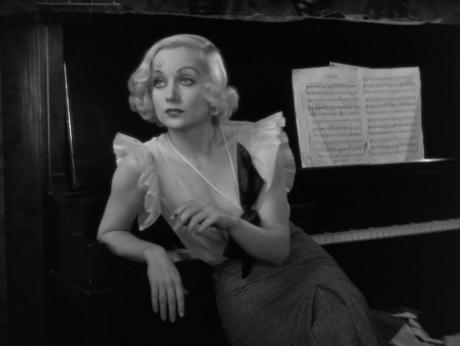 I’ve mentioned in earlier installments that I’m a huge fan of Turner Classic Movies. Well, after all, who isn’t? Every month is a good month to watch the TCM channel, but September 2014, the month of this post, will be a special treat. That’s because TCM is planning a special, comprehensive retrospective of pre-Code films. Over the course of the month, more than 60 gems from this rich, vital period of American film history (roughly 1930-early 1934) will be presented, some of them television premieres. The lineup will include such pre-Code landmarks as Baby Face and Safe in Hell, along with a full complement of lesser-known titles.
I don’t know why Virtue is still such a little-known film. It’s certainly not for any lack of effort on TCM’s part; the film has played the channel before, has been issued on DVD, and has also been shown on the big screen at TCM’s Classic Film Festival. In any case, it’s a marvelous little picture, ripe for discovery by a larger audience.
Produced late in 1932 by Columbia Pictures, Virtue benefits from a smart, understated script by Robert Riskin and moody cinematography by Joseph Walker, both best remembered for their later work with Frank Capra. A brief précis for those unfamiliar with the story: Carole Lombard stars as a New York prostitute, arrested and ordered to leave town or face jail time. Pat O’Brien plays a cynical cab driver with an especially disparaging view of women. Lombard evades the law and remains in the city; she and O’Brien meet by chance and begin a tentative relationship, he under the impression that she’s an out-of-work stenographer. Theirs is a wary romance, each one scarred by experience and half-afraid to trust in their newfound happiness. Lombard, in particular, lives in fear that O’Brien will discover the truth about her past.
There’s much more to the story than that, including assorted plot twists and an unsolved murder, but even this cursory outline will indicate that this is one dark, captivating little film. The pre-Code period has been widely misunderstood, even by some fans. What really sets it apart is a tough, gritty outlook on life, one that coincided with the early years of the Great Depression. (For that matter, the very term “pre-Code” is something of a misnomer anyway, since technically the Production Code did exist during those years.) Virtue is very much in line with that street-level attitude. Its moments of tenderness are doubly poignant because its characters are attempting to wrest happiness from the harsh reality of their daily lives. In fact, this film may be seen not only as a pre-Code picture, but as an entry in another category: with its stark urban setting, rainy streets, criminal milieu, and uncompromising frankness, it qualifies as an early example of film noir.
One of the great strengths of the film is Carole Lombard’s performance in the leading role. Conventional wisdom tells us that Lombard’s early career was undistinguished, and that she only came into her own with her performance in Howard Hawks’s Twentieth Century (1934). The Hawks classic is a delight, and it certainly had the effect of shifting Lombard’s career into high gear—but I think it’s a mistake to dismiss her earlier performances. Here she’s compelling as the unfortunate Mae, hard-bitten on the surface but shy and vulnerable underneath. As she takes the first tentative steps toward a new life, cautiously opening her heart to O’Brien, her performance is more than a little touching. O’Brien himself turns in another strong performance as the know-it-all wise guy who harbors an inner decency of his own.
And there are other subtly written and played performances, too, among the supporting characters, including those of Ward Bond as O’Brien’s fellow cab driver, and Mayo Methot as Lombard’s friend, a hard-boiled older dame who tears up while listening to her prized recording of “My Gal Sal.” Jack La Rue has a sizeable role for this early period in his career, playing a particularly vicious (but not very bright) small-time hoodlum.
With all these and other qualities going for it, Virtue is highly recommended. Those who have not seen it before are in for a treat. And one hopes that this generous TCM showcase will help to introduce this, and so many other pre-Code treasures, to the wider audience that they deserve.