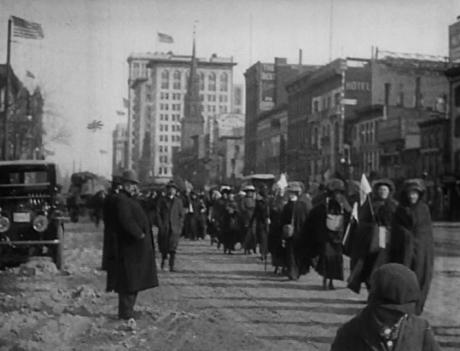 We’ve recently been reminded that this year marks the centenary of a major event in American history: the passage of the 19th Amendment to the Constitution, granting women the right to vote. In 1920 this move was long overdue—but, at that, it was not achieved without a long, hard fight. The struggle for woman suffrage had already been going on for decades by 1920. It coincided with the invention and early development of the motion picture, and, as a result, we now have a cinematic record of some of the trials that women endured along the way. Actualities and news films of demonstrations and marches, and dramatic fiction films—and, admittedly, comedies mocking the idea of votes for women—serve as a time capsule of the period, preserving the atmosphere of the world in which brave women campaigned for this basic American right.
One notable event along the way was the famous Woman Suffrage Procession in Washington, D.C., in March 1913. Several individual states had already granted women the vote, starting in 1910, but this piecemeal approach was still far from satisfactory. To call attention to the need for a national policy of voting rights for women, a group of organizers staged a parade down Pennsylvania Avenue in Washington on 3 March 1913, the day before Woodrow Wilson’s inauguration. The event was a success and attracted thousands of marchers, including suffragists from many states as well as other countries, along with some men sympathetic to the cause. (My fellow Disney enthusiasts may be interested to know that the participants included an all-female marching band led by Alma Nash—whose younger cousin, Clarence Nash, would become the voice of Donald Duck twenty years later. Alma was a considerable talent in her own right, with a long career as a musician and music teacher.)
Even this 1913 event had an additional, colorful side story of its own. Weeks in advance, the New York contingent of marchers, to help call attention to the upcoming parade, mounted a “pilgrimage” on foot from New York to Washington. Starting in bitterly cold weather on 12 February, fourteen women set out to make the 180-mile journey on foot, timing their route in order to arrive in Washington in time for the parade. Their trip was successful in attracting widespread attention in its own right. Crowds of women in the various cities along the way joined the march as it passed through their communities, and the press gave the incident ample coverage.
That coverage included a segment in the Universal Animated Weekly, one of the first American newsreels. Since it was impossible to walk across the Hudson River, the New York marchers actually started their trek in Newark—and the Universal cameras were on the spot on the appointed day, ready to record the proceedings for posterity. The resulting newsreel segment, On to Washington, is one of the many gems of film history preserved and made available to us through the efforts of the National Film Preservation Foundation. It’s one thing to read about an historic effort like this march, but quite another to experience the stark immediacy of the moment in moving pictures. The Universal cameras give us a closeup of the march’s main organizers, Rosalie Jones and Elisabeth Freeman, posing before the start of the march; and longer shots of the streets of Newark, capturing the attendant excitement as a crowd of observers and hangers-on gathers around and walks alongside the beginning of the procession.
This year, as we mark the anniversary of the women’s vote—on which so much will depend, this coming November—it’s well to remember that that fundamental right was a long time coming, and represented a hard-won victory. Thanks to preserved films like this brief newsreel entry, we can gain a fresh appreciation of the sacrifices that made it possible.