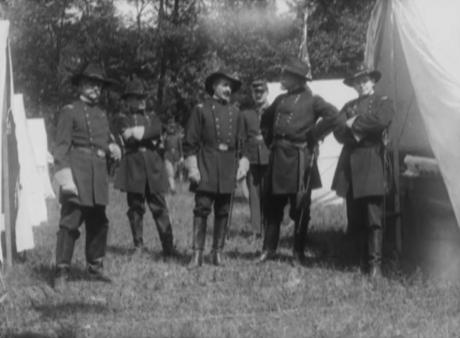 It comes as a shock to some film enthusiasts— including more than a few silent-film devotees—to discover that the period we think of as “the silent era” was actually marked by numerous experiments with sound film. None of them achieved any real success, of course, until a combination of factors brought about the talking-picture revolution of the late 1920s. But in the meantime, enterprising producers did continue to produce sound films, and some of the results were extraordinary. An exciting new DVD, to be released in August, showcases one of the most remarkable early sound-film systems: the Edison Kinetophone. Launched with a flourish of publicity in February 1913, the Kinetophone was vigorously promoted by the Edison company: more than 200 sound films were produced for it, and they were exhibited in distinguished theaters in America and abroad. But the system was plagued by picture-sound synchronization problems, and, without the convincing illusion of live sound, audiences soon became dissatisfied and lost interest. By the end of 1913 the Kinetophone’s commercial life was over, and it was quietly forgotten.
In one way that’s a fortunate thing; it’s staggering to think of the many classic silent films that would never have been produced—at least, not in the way we’ve come to know and love them—if talking pictures had caught on in 1913. On the other hand, the Kinetophone was itself an important phenomenon that deserves to be remembered today. The system essentially combined two inventions that had already been separately promoted by Edison: the motion picture and the gramophone. The films’ “soundtracks” were provided by the gramophone, recorded on cylinders that were thicker and longer than the commercial variety then being marketed by Edison. The playing capacity of these modified cylinders was limited to six minutes; consequently that was the maximum running time of a Kinetophone sound film. Electrical recording would not be introduced until the 1920s; the Kinetophone cylinders were acoustic recordings, the sound recorded and played back through large horns.
Working within these restricted circumstances, the Edison forces covered an impressive array of subject matter in their sound films. Kinetophone subjects included musical performances, blackout comedy skits, spoken-word addresses to the audience by public figures, and vaudeville acts. (Among the latter were Gus Edwards and the team of Van and Schenck, both of whom would appear before the cameras again fifteen years later, when talking pictures did become successful.)
One of the more ambitious Kinetophone productions was The Deaf Mute, produced in September 1913. With this Civil War playlet, written by Rupert Hughes, the filmmakers endeavored to bypass the six-minute limit by producing their story in five reels—in effect, a “feature-length” talking picture. The Rupert Hughes connection was not insignificant; Hughes was one of the most popular writers of the 1910s, and the prestige associated with his name was an indication of the esteem accorded Edison’s enterprise. The Civil War setting, too, was noteworthy. The years 1911–1915 represented the semicentennial of the war, an event that still resonated in living memory, and books, plays, and literally hundreds of Civil War-themed films marked the occasion. (I’ve written about two of those films in earlier installments of this column.) The Deaf Mute thus had a timeliness that 1913 audiences would have recognized.
But the most striking aspect of this film, to our eyes, is the actual experience of seeing it. Here before our eyes is an authentic sound film of 1913, and it plunges us into that world in a new and unfamiliar way. The story concerns a Northern general who suspects that a peddler, ostensibly deaf and mute, who has been hanging around his camp is actually a spy leaking tactical secrets to the enemy. The film opens in the Union camp—filmed outdoors, not in an acoustically controlled studio—and begins with four uniformed officers (likely the Edison Quartette, who also appeared in other Kinetophone films) harmonizing a rousing chorus of “Marching Through Georgia.” The story begins, performed by actors who clearly are stage-trained, enunciating their lines, facing front, and projecting their voices to the far reaches of the theatre. It’s an historically fascinating time capsule.
Fascinating and tantalizing—for this is only part of The Deaf Mute. Of the film’s five reels, only the first is known to survive in the form of both picture and sound; the reel ends as the general is preparing to question the suspected spy. The Kinetophone, like the later sound-on-disc Vitaphone sound system, presents the film preservationist with a compounded challenge: the picture and the sound were recorded as separate elements, many of which have been separately scattered and lost over the years. In a precious few instances, both the picture and the sound for the same title have been located. Now the preservation wizards at the Library of Congress, working with the Thomas Edison National Historical Park Museum, have reconstructed these fully-extant reels, restoring both picture and sound—and combining them so that today’s viewer can enjoy them with the precise synchronization that was denied their first audiences. The Library’s George Willeman has already presented some of them at film festivals in recent years. Now, thanks to Ben Model’s Undercrank Productions, these films—including both The Deaf Mute and seven other titles (which are self-contained and presented in their entirety)—are within reach of the home viewer. It’s a priceless opportunity to recapture a unique and nearly-forgotten chapter of our film history.