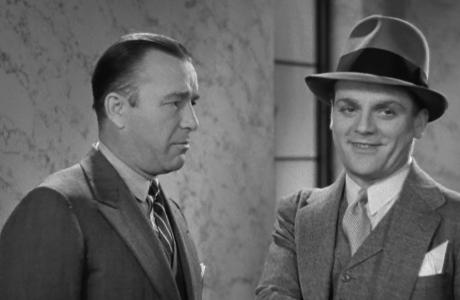 The FBI has been in the news lately, and it seems appropriate to revisit a classic film that marks a key moment in both film history and the Bureau’s history. Released in 1935, G-Men was reissued in 1949 with an added prologue—still appended to the version of the film we generally see today—in which David Brian described it as “the daddy of all FBI pictures.” Strictly speaking, it wasn’t really that, but it does capture and commemorate an historic American moment in the mid-1930s. Besides that, it’s a great movie!
We pay a good deal of attention to pre-Code films in this column. When G-Men is remembered at all today, it’s usually cited as a textbook example of a post-Code film—that is, a film produced after the establishment of the Production Code Administration in mid-1934, when Hollywood studios were newly obliged to abide by the preexisting rules of the Production Code. One of the strictest rules in the Code was that movies must not glorify or glamorize crime, lest impressionable moviegoers be inspired to defy the law and pursue lives of crime themselves. To Warner Bros., producers of the best gangster films in the business—which had, arguably, glamorized crime throughout the early 1930s—this was a troublesome restriction. How to deal with it? Answer: by casting Jimmy Cagney, the star of Public Enemy and other gangster classics, in a film that put him on the right side of the law. The result was G-Men, which gave Cagney’s fans a full dose of his characteristic energy, charm, quick wit, and fast-action proclivities, but placed them firmly on the side of law and order.
This is the narrative we usually hear, and it’s accurate as far as it goes. In fact, however, there’s more to the story: Warners’ moment of decision coincided neatly with a corresponding shift in the FBI’s own history. The Bureau had originally been established in 1908, and was known simply as the Bureau of Investigation (not until 1935, the year G-Men was released, would “Federal” be added to its name). This early, low-profile version of the Bureau was a branch of the Department of Justice, but otherwise bore scant resemblance to the agency we recognize today. It was not part of the law-enforcement community; instead, as its name promised, it was focused solely on investigation of crimes and crime scenes. Its agents were trained in scientific analysis and lab work, and were forbidden to carry firearms. That all began to change in 1924 when J. Edgar Hoover was appointed director of the agency, and immediately assumed a more aggressive approach to its activities.
In the early 1930s, when the combined privations of Prohibition and the Great Depression spawned a colorful wave of crime across the country, Hoover’s tactics really came into their own, especially when Congress authorized the Bureau’s agents to carry guns after all. One of Hoover’s talents was a knack for public relations, and at this time he mounted an overt campaign to promote a public image of the Bureau as a powerful crime-fighting force. Warner Bros., the blue-collar movie studio which proudly supported FDR and his administration—and which was now facing the new strictures of the Production Code—was eager to cooperate with this campaign.
The resulting film is a nearly seamless marriage of Hoover’s agenda, on one hand, and the skills of the well-oiled Warners moviemaking machine on the other. Having taken on the assignment of reforming their gangster star, the writers manage that transformation with finesse; Cagney’s character settles into his new honest career only by degrees. At the same time, the film reflects Warners’ cooperation with the Bureau by including quasi-documentary scenes of the agents analyzing fingerprints and other clues. Following a time-honored movie custom, Cagney the brash young hothead clashes with his immediate supervisor (Robert Armstrong), only to form a bond of friendship with him as they continue to work together. The film also gives him two leading ladies, both familiar faces in the Warners stock company: “good girl” Margaret Lindsay and “bad girl” Ann Dvorak. (The latter, incidentally, is introduced as a nightclub entertainer in a sequence underscored by a generous assortment of songs from recent Warner musicals.) And the well-constructed screenplay culminates in several reels of furious action, enough to satisfy any devotee of crime films, regardless of affiliation. The FBI could hardly have asked for a more entertaining cinematic showcase for its new image. And today’s film enthusiast is doubly fortunate to have this film that doubles as both a classic movie and a rich historical time capsule.