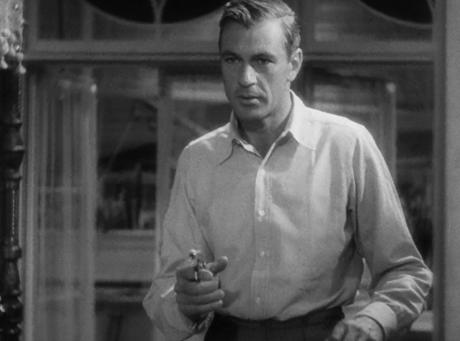 It’s been years since I watched Paramount’s The General Died at Dawn, but in the course of researching a current book project, I happened onto an unexpected link between this and another film. That was enough to engage my curiosity, and motivated me to take a fresh look. The result confirmed my long-held belief that it’s not enough to watch a classic (or near-classic) film just once; periodic repeat viewings will inevitably reward the viewer with fresh perspectives and, possibly, a deeper appreciation. In the case of The General Died at Dawn, I dismissed the film long ago, perhaps too hastily. Now, on a return visit, I find much about it to admire and study.
Certainly it’s of interest as a vehicle for Gary Cooper, who was by 1936 one of the most successful actors in Hollywood (1936 was, after all, the same year he starred in the Frank Capra classic Mr. Deeds Goes to Town). Paramount Pictures acknowledged his star power by lavishing generous production values on his starring vehicles. The General is no exception: the direction is by Lewis Milestone, and the photography, all brooding chiaroscuro and moving camera, is the work of Victor Milner. The story features Cooper as an American soldier of fortune undertaking a dangerous mission in China, smuggling a large sum of cash to a notorious gun runner in order to help mount a rebellion against a brutal warlord. Cooper compromises his mission by letting a beautiful woman lure him into making his journey by train—a train where the warlord’s forces are waiting to ambush him. The film unfolds through a series of betrayals, surprise attacks, and escapes on its way to a bloody but satisfying conclusion.
The script, based on a novel of the same title, is the first film work of Clifford Odets. By the mid-1930s Odets was a celebrated playwright, and Paramount recruited him for this film on the strength of that reputation. His theatrical works had been marked by overt social and political commentary, and when this film was released, some New York critics were disappointed by its lack of a political subtext. (One of the wittier critical comments: “Odets, where is thy sting?”) Fifteen years later, during the McCarthy years, the pendulum swung to the opposite extreme when Odets, along with other Hollywood writers, was summoned to appear before the House Un-American Activities Committee. Aware of his leftist sympathies, the Committee singled out The General Died at Dawn for special attention, charging that Odets had embedded subversive propaganda in the script!
Such a claim was nonsense, of course, but Odets’ inquisitors might well have charged him with a different offense in writing this script. Having been brought to Hollywood on the strength of his theatrical successes, Odets undoubtedly felt a responsibility to live up to his reputation—but writing for the stage and writing for the screen are two different things. In the midst of this otherwise well-crafted action melodrama, Odets undermines Gary Cooper and the rest of the cast by inserting passages of contrived, pretentious dialogue in their mouths. These recitations might have seemed effective on stage in the mid-1930s, but as movie dialogue, they have not worn well. If this film is relatively little remembered today, I submit that Odets’ script may well be a prime factor.
Which is a shame, because apart from the dialogue, The General Died at Dawn has much going for it. Milestone, Milner, and company mount a stylish display of cinematic craftsmanship, with beautifully staged, photographed, and edited action highlights. Too, some understated dramatic moments that play without dialogue—for example, the ritual suicide of an underling who has disgraced himself by accidentally embarrassing the warlord in the presence of his captives—are quietly powerful. The cast, too, is excellent. Cooper’s leading lady, the reluctant femme fatale, is British beauty Madeleine Carroll, whose international exposure in Hitchcock’s The 39 Steps had earned her a fresh round of offers from Hollywood. And the cast is rounded out with a full complement of beloved character players: Porter Hall, Dudley Digges, William Frawley, J.M. Kerrigan.
In short, this film’s latter-day obscurity is perhaps understandable, but unfortunate just the same. The film enthusiast who seeks it out will find an offbeat cinematic experience—not without flaws, but offering more than enough virtues to compensate for them.