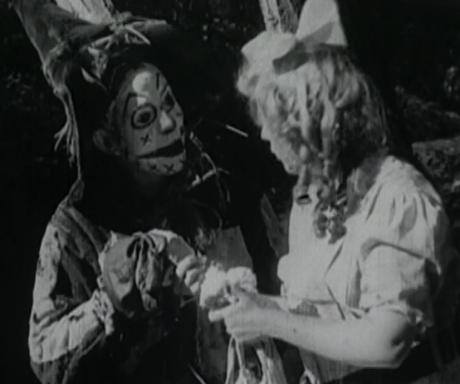 Fans of the 1939 MGM version of The Wizard of Oz may already be aware that an important new book about that film’s production—The Road to Oz, by Jay Scarfone and William Stillman—is due for publication in October. In honor of the occasion, I’m taking a fresh look at one of the Oz films that preceded the MGM version. There actually were a surprising number of pre-1939 Oz movies, starting at least as early as 1910 with several one-reelers produced by Selig. But I for one have always been particularly intrigued by the feature films produced by the Oz Film Manufacturing Company—a motion-picture production company established in 1914 by L. Frank Baum himself, the author of the original Oz stories, to produce films based on his own works. This, I think, is a precious facet of the Oz cinematic legacy: the original author’s vision, adapted to the screen by his own hand.
And, I hasten to add, it looks nothing like what one might expect. For those unfamiliar with these films, it’s important to bear in mind the profound influence the MGM production has had, in hindsight, on our perceptions of The Wizard of Oz. For audiences at the turn of the twentieth century, the title had a far different connotation: it signified Baum’s books, and a musical stage version mounted in 1902. The stage show was aimed largely at adults and included generous doses of satire and political jokes; today’s fan would find it unrecognizable. But it was hugely successful in 1902–03, and in fact was still being periodically revised, and still playing in stock and regional theaters, in 1914 when Baum formed the Oz Film company.
Starting with this varied background, Baum clearly felt bound to no particular scenario in constructing his films. Instead he unleashed his imagination, indulging in a kind of freewheeling whimsy as he concocted new adventures in the land of Oz. His stock company of players included Violet Macmillan, who had played Dorothy in the stage production; Pierre Couderc, an acrobat formerly of the Folies Bergère; and Fred Woodward, who donned a succession of costumes to play a variety of fanciful animal characters. Lovely Vivian Reed was the “Oz Girl,” a sort of living logo for the studio, who introduced each film in a smiling closeup and then doubled in a featured role in the ensuing story.
In His Majesty, the Scarecrow of Oz she is seen as Princess Gloria, who scorns the suitor her father selects for her, and falls in love with the gardener’s boy instead. Her father, King Krewl, lives up to his name by directing a witch to “freeze” the Princess’s heart to all mortal loves—after which she wanders listlessly through the film, regarding everyone and everything with cold disinterest. Dorothy and her friends, the Scarecrow and the Tin Woodman, set out to enlist the help of the Wizard of Oz to break the witch’s spell. (The Cowardly Lion does appear in this film, but only briefly; here Dorothy’s party is rounded out by Button Bright—played by Mildred Harris, who is best remembered today for having married Chaplin a few years later.) 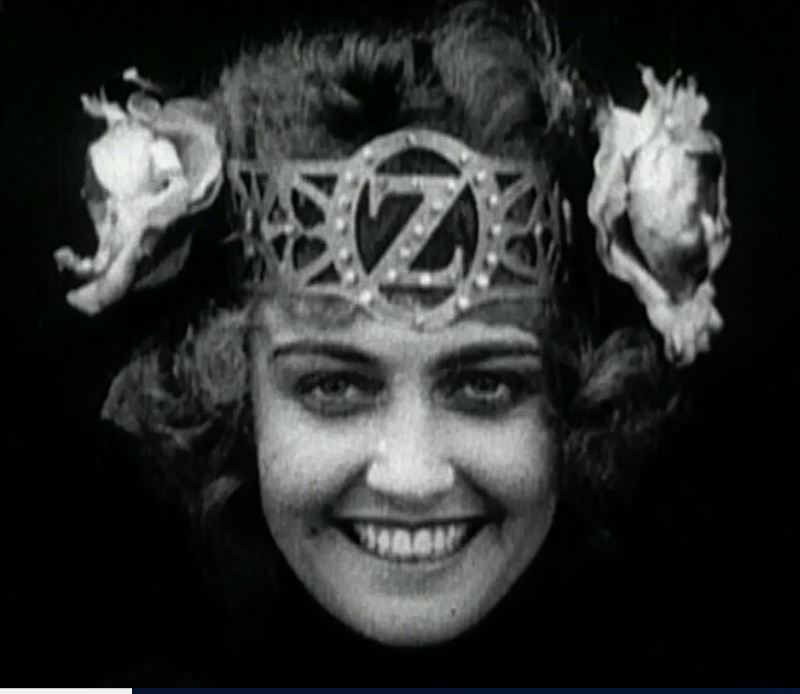 That’s the basic plot situation. I won’t give away the resolution—but, in any case, what’s interesting in the Oz features is not the plot resolution, but how the film gets there. His Majesty, the Scarecrow of Oz takes a meandering path, to say the least, through its five reels. As the Oz company’s third release, it is perhaps a bit more cinematic than its predecessors—but it still has an extremely loose, spontaneous quality about it, as if Baum and company are making up the story as they go along. In 1914, of course, the feature-length film itself was still in a formative state, but even compared to other contemporary fantasy films—for example Paramount’s Cinderella, starring Mary Pickford, released in the same month—His Majesty has a very impromptu look.
Lest this sound like a criticism, let me add that this spontaneity is, for me, part of the charm of the Oz films. As we watch His Majesty, we have the sense that Baum is improvising a new fairy tale and has invited us to join in the fun. The rough edges only add to our enjoyment. The special effects are rudimentary, and generally no match for the illusions that Méliès was creating ten years earlier. Magical transformations, as when the witch spitefully turns the gardener’s boy into a kangaroo, are simple cross-dissolves. In one scene Dorothy and her companions, traversing a stream on their way to the Wizard, sail their raft up a “Wall of Water” and back down the other side—an effect which the cameraman accomplishes simply by tilting the camera on its side! But, again, this refreshing simplicity is part of the film’s appeal. As we celebrate the lasting cinematic legacy of The Wizard of Oz, I think it’s important to remember all the elements of that legacy—including this endearing little side road, bearing the unique stamp of the stories’ original author.