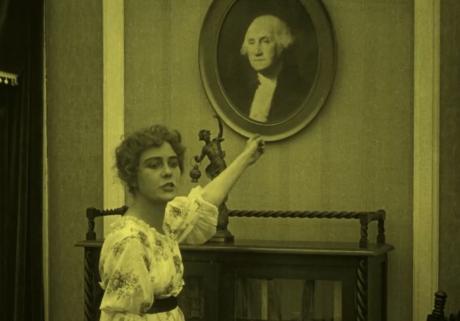 Two years ago, in this space, I observed the Fourth of July with a 1938 Warner Bros. historical short reenacting the signing of the Declaration of Independence. Obviously, this month’s selection is something very different! As its title suggests, Jane’s Declaration of Independence is a contemporary and more personal story. But it has a relevance of its own—it was produced, in 1915, expressly to be released on Independence Day weekend—and, in addition, serves to highlight the spirit of international cooperation in today’s film-preservation world. The San Francisco Silent Film Festival, one of our leading festivals, not only offers state-of-the-art presentations of silent films, but in recent years has taken an active role in restoring key films that might otherwise have been lost. Jane’s Declaration is one of those success stories.
The film was produced in 1915 by Bison 101, a studio remembered today primarily for Westerns and Civil War stories—often with grim, tragic endings. Today’s viewer, conditioned by that reputation, may be surprised at the opening scenes of Jane’s Declaration. The film begins with a light tone and a stock situation from romantic comedies: a young couple who want to get married but are opposed by the young lady’s father. Here the girl’s sweetheart is an officer in the U.S. Army, and the father likes him well enough, but feels that the life of a soldier’s wife is unsuitable for his daughter. Soon enough the film adopts a more serious tone as the daughter rebels against her father’s objection. Rebuffed yet again, she mounts a spirited defense of a soldier’s calling. Historical flashbacks play out on the screen as she passionately invokes the memory of the family’s ancestors, and recounts their heroics in key military conflicts in American history.
Along with this premise, Jane’s Declaration offers another layer of historical interest. The girl’s fiancé is a fictional officer, but he’s stationed at an authentic Army base: Fort Scott, located on the grounds of the Presidio in San Francisco. As the film continues, we get scenes of marching troops and assorted activities, filmed on the parade ground and other picturesque sites at the Presidio. These location shots, historically invaluable today, would not have been possible without the Army’s cooperation—and, in fact, the Army actively encouraged this kind of outside access during the years leading up to America’s entry into World War I. Production of Jane’s Declaration coincided with the nearby Pan-Pacific International Exposition of 1915, when tourists were invited onto the base at scheduled hours to witness dress parades by the Coast Artillery Corps. One of those performances was duly captured on film for this picture.
Another reason to be thankful for this film, and so many other restored films of the mid-1910s, is in their casts: they afford us a glimpse of the vast legion of players who flourished during those years and are essentially forgotten today. Prime examples here are the young couple at the center of the story, Agnes “Brownie” Vernon and Hobart Henley (although, shortly afterward, Henley did go on from acting to what would prove to be a long and prolific career as a director). Cleo Madison had originally been cast as the title character in Jane’s Declaration, and Miss Vernon’s substitution was such a last-minute decision that some Universal publicity did advertise Cleo Madison as the leading lady.
The restoration of this film is noteworthy in itself. The San Francisco Silent Film Festival undertook the restoration project with the support of the National Film Preservation Foundation. The source element was a 35mm print discovered in the collection of another collaborator, the EYE Filmmuseum in Amsterdam. The EYE museum has its own distinguished history of film preservation, and has made a point of preserving films with their original color tinting. Their print of Jane’s Declaration was a European release print with Dutch titles, and was incomplete; of the original two-reel length, this version had a footage count just over one reel. Considering that, the continuity we see today seems surprisingly complete and self-contained, with only a few teasing hints of missing story material. Casualties include some of the historical flashbacks; while the surviving print includes an episode from the Civil War, the original film reportedly also featured flashbacks set during the American Revolution and the Spanish-American War. (At least one still survives to vouch for the Revolutionary War segment.) Starting with this source material, the restoration team worked painstakingly to bring the visuals back to their original luster, and to reconstruct the English titles, using the title font and format still visible in other contemporary Bison releases.
Today we have the luxury of viewing the resulting restoration online, in the “Screening Room” section of the Festival’s website, complete with a lovely accompanying musical score by the Mont Alto Motion Picture Orchestra. Also recommended, as an enhancement to the viewing experience, is a separate video produced by the Festival, charting the history of the Presidio in this and other Hollywood films, and detailing the restoration of Jane’s Declaration. It’s all indicative of the dedicated work going on in today’s film-preservation community, ensuring that the coming years will bring still greater access to our rich classic-film heritage for the benefit of current and future devotees.