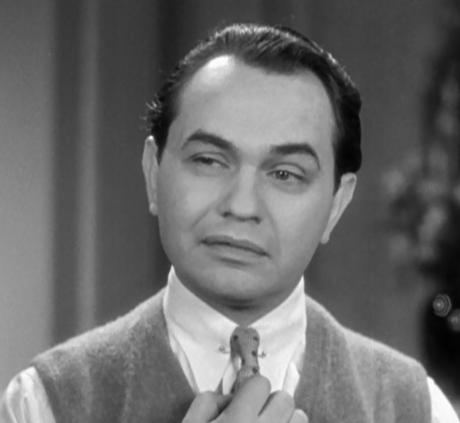 I like to start the new year with a Warner Bros. pre-Code, and The Little Giant is one of my favorites in that category. It’s become a better-known film in recent years, but when I first saw it (quite a few years ago, I confess) I had never heard of it before, and my pleasure in the film itself was compounded by the joy of discovery. At the risk of spoiling that pleasure for someone else, I’m highlighting it here. If anyone reading these words has never seen The Little Giant, or is completely unfamiliar with it, consider this a recommendation. It’s not only a well-made and historically interesting film, pulled off with Warners’ characteristic style and crackling pace—it’s also great fun.
At the forefront of the film is Edward G. Robinson, who had vaulted to top stardom a scant two years earlier in Little Caesar. In that single picture, one of the all-time classics of the crime film, Robinson had indelibly etched his image as the quintessential movie gangster—an image that retains its full power today. But as his career continued to unfold, Robinson actually kidded his own gangster image as much as he reinforced it, appearing in an assortment of comedies (John Ford’s The Whole Town’s Talking being a deservedly famous example) that played his tough-guy persona for laughs. The Little Giant was one of the first.
Its premise is simple: if the net effect of Prohibition was to elevate organized crime in America to an unprecedented level of power and influence, what happens when Prohibition is repealed—as it was early in 1933? Where can the racketeers go, when their illicit trade becomes legal again? For Robinson’s character in The Little Giant, the answer is retirement. “Our racket can’t last much longer,” he tells his gang. “I’m steppin’ out of it tonight, and if you’re smart you’ll all step out of it.” Leaving behind his life of crime on the streets of Chicago, he takes his ill-gotten fortune and heads for the West Coast and sunny Santa Barbara, to mingle with society and become a gentleman. But Robinson in society is a fish out of water, and what happens next is nothing like he expected.
Now the stage is set for a series of delightful comedy set-pieces, as Robinson makes an honest effort to shed his crude manners and lingo and adapt to the cultured ways of the smart set. Learning that polo is all the rage, he clumsily attempts the game; invited to a social gathering, he wanders through the crowd cheerfully dropping phrases like “Very distangway, I’m sure!” In one early scene he shows off his collection of abstract art (a doubly notable scene, given Robinson’s own interest in art in real life). “It ain’t got a nickel’s worth of perspective,” he proudly exclaims, indicating one painting. “Go ahead, point me out some perspective, I dare you to!”
While Robinson’s character is the butt of most of the comedy, the film’s wit cuts the other way too, skewering the pretensions of California society. This kind of satire demands a smart, savvy script, and The Little Giant has one, courtesy of Robert Lord and Wilson Mizner. Lord was one of Warners’ top, and most prolific, writers, while Mizner was—if even half the stories about him are true—quite a colorful character in his own right, with firsthand underworld experience of his own. His Warner credits are relatively few, but it’s surely not a coincidence that he worked on some of the studio’s best films during this period, including The Dark Horse, One Way Passage, and Heroes for Sale as well as The Little Giant.
And the film shows off its Warners (technically, First National) credentials in other ways as well. The opening montage, set on Election Day 1932, displays the studio’s very public support of Franklin D. Roosevelt. In city after city, radio announcers bark out the latest returns, celebrating Roosevelt’s landslide victory over Hoover—getting around to the imminence of Repeal only as an afterthought. One party scene features a crowd of extras, among whom one can glimpse a generous complement of Busby Berkeley’s dancing girls (who happened to be on the lot at the time, filming musical numbers for Gold Diggers of 1933). And John Kelly, Dewey Robinson, and other reliable character players are on hand too, appearing in the opening scenes as members of the suddenly defunct gang—and returning at film’s end in a hilarious and satisfying plot resolution straight out of Damon Runyon.
The Little Giant has all this and more going for it. It’s a sure cure for the winter blues, and a wonderful way to start off a new year.