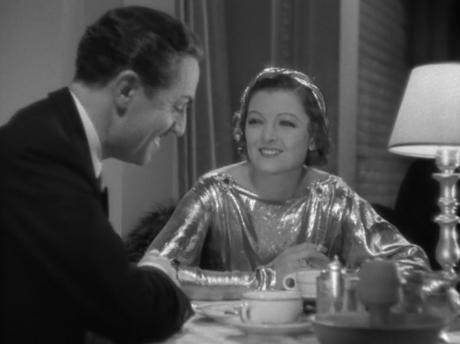 Of the thousands of films produced during Hollywood’s golden age, some are remembered today for their cinematic greatness, while others are remembered for reasons that have nothing to do with the films themselves. Manhattan Melodrama is one of the latter. Released by Metro-Goldwyn-Mayer in the spring of 1934, it has been shadowed ever since by an accident of history: it was the featured attraction at Chicago’s Biograph Theater in July 1934—on the day that the FBI, lying in wait outside the theater, ambushed and killed John Dillinger as he emerged from the exit. Viewing this movie was, essentially, the last act of Dillinger’s life. (I may as well confess that, back in the days of the Wichita Film Society, we programmed this picture and publicized it as “the film that killed Dillinger”!) Today it is far better remembered for that accidental notoriety than for anything in the film itself.
Which is a shame, because Manhattan Melodrama is a memorable film on its own merits. Among other things, it’s a telling portrait of Hollywood on the eve of the Production Code. In 1934 the Production Code Administration was about to be officially established, enforcing the already-established provisions of the Code. One of those provisions was that crime and criminals were not to be glorified. Lawbreakers must not be “presented in such a way as to throw sympathy with the crime as against law and justice.” Hollywood studios had openly flouted this rule for years in producing the great gangster films, which presented criminals in a decidedly glamorous light. How would they deal with the newly-enforced restriction? Warner Bros. would famously do so in 1935 by casting James Cagney, the star of Public Enemy and other gangster classics, in G-Men, where he would join the FBI and decisively cast his lot with the forces of law and order.
But in Manhattan Melodrama, produced a full year earlier, MGM anticipated the new order, and did so in a very different way. Here the story is the classic tale of childhood friends who grow up on opposite sides of the law. Clark Gable is a gangland boss, who controls a crime empire and isn’t afraid to do his own dirty work; William Powell is a crusading district attorney determined to bring down the criminal element. The two boyhood pals meet and find that, their opposed lifestyles notwithstanding, their bond of friendship is as strong as ever. Even when Gable’s mistress, Myrna Loy, leaves him for Powell—the first romantic pairing of Powell and Loy on the screen—Gable enthusiastically supports their union and even volunteers to serve as best man at the wedding. The film’s story becomes a study in super-extremes of loyalty: Gable’s loyalty to his friend, Powell’s loyalty to his principles.
This is an ingenious device, calculated to ward off future objections from the censors. Gable as the gangster presents an undeniably sympathetic character, but wears his admiration for Powell and his principles on his sleeve. As the story continues, Gable doesn’t abandon his life of crime—but he finds himself in a unique position to commit a murder that supports Powell and paves the way for his ambitious program of law and order. In effect, he sacrifices himself for the good of his friend. At the murder trial, while Powell struggles with his conflicting emotions, Gable is less occupied with his own fate than with his open veneration of Powell (“Class—it’s written all over him!”). And at film’s end he goes to his execution, not only willingly but cheerfully.
The story has the benefit of a smart script from Oliver H.P. Garrett and Joseph Mankiewicz, invoking references to such real-life events as the Arnold Rothstein case. Among the film’s points of historical interest is one involving music: in a nightclub scene, a singer is heard performing a Rodgers & Hart song known here as “The Bad in Every Man.” This song is actually reworked from another number written for, but cut from, an earlier MGM film. Before year’s end the song would be reworked yet again as “Blue Moon,” and would go on to take its place in the classic American songbook.
All of this unfolds on the screen with MGM’s customarily handsome production values. Living up to its reputation for meticulously fussing with details, the studio continued to tinker with the film and ultimately decided to shoot some new scenes and retakes. Reportedly, director W.S. Van Dyke was unavailable to shoot the new scenes because he had already started work on his next picture, one that would reunite William Powell and Myrna Loy, the couple who had clicked so harmoniously in Manhattan Melodrama. The new film? None other than The Thin Man.