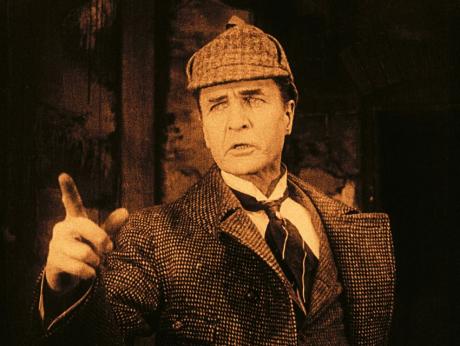 This is a special entry. Ordinarily this space is reserved for more or less obscure films, and as little as two years ago, no film could have been more obscure than Essanay’s 1916 Sherlock Holmes. Not only was it widely forgotten, it had long been presumed a lost film. That all changed in 2014 with the near-miraculous discovery of a nitrate print in the vaults of the Cinémathèque Française. The film was subsequently restored in a collaborative effort by the Cinémathèque and one of my favorite festivals, the San Francisco Silent Film Festival. Since then the newly-recovered film has been given several gala screenings, to the combined joy of silent-film enthusiasts and Sherlockians everywhere. October, the month when this post will appear, marks a milestone in the unveiling of Sherlock Holmes: it will be premiered at the London Film Festival and at my other favorite festival, Le Giornate del Cinema Muto; and will be released on a sparkling new DVD/Blu-Ray from Flicker Alley. It all amounts to a month-long celebration, and thanks to the kindness of Rob Byrne, Russell Merritt, and Cèline Ruivo, three of the principals behind the restoration, I’m delighted to add my voice to the celebration.
Much of the excitement over this resurrected film centers on its star, William Gillette. Long before Basil Rathbone or any of our other favorite stars essayed the role of Sherlock Holmes, Gillette was the first major actor identified with the role. Moreover, he made the role his own in a play he wrote himself, with the approval of no less than Sir Arthur Conan Doyle. (This was doubly remarkable since Gillette took some liberties with the plot, including the introduction of a romantic love interest for Holmes, something that one might have thought was hardly calculated to find favor with Conan Doyle!) Since 1899 Gillette had played Holmes on the stage well over a thousand times and had become legendary, widely celebrated as the one actor born to play the part. He proceeded to star in one film—the 1916 Essanay feature—and since the film was thought lost, it too had become no more than a legend, until now.
Its survival today is due to Essanay’s decision, in 1919, to release the film in France—reconfigured as a four-part serial, to capitalize on the contemporary French vogue for movie serials. The Cinémathèque print was this serial version. Happily, apart from being divided into four component packages with episode titles, the original feature seemed not to have been tampered with at all; Russell Merritt noted in his San Francisco program note that, apparently, “not a frame of the original picture is missing.” No definitive cutting continuity or other guide seemed to have been preserved, which might indicate the exact continuity of the original American feature. Faced with this situation, the restorers made the wise decision not to try to reconstruct an uncertain original, but to preserve what is known to be the authentic serial version. The result is a kind of multilayered viewing experience: the substance of the original American feature, combined with the form of the French serial.
Restored to view after so many years, Sherlock Holmes is a remarkable experience, one that requires us to unlearn many of the conventions we’ve come to expect. Gillette’s performance fully lives up to its advance reputation. His Holmes is riveting, assured—and highly distinctive, utterly unlike the interpretations of Basil Rathbone and other successors. It’s easy to see the stage presence he must have projected in the play; he moves through the plot with quiet authority. While other characters succumb to displays of emotion, Holmes maintains a cool, unflappable aplomb—but always remains firmly in command of the situation.
Other characters, too, are surprising. Moriarty, “the Napoleon of crime,” is hardly the subtle, crafty mastermind that Conan Doyle had pictured. Instead, as portrayed by Ernest Maupain, he’s excitable and intimidating, forever on the verge of an explosion. His volatility makes a nice contrast to Gillette's steely calm. Dr. Watson, too, defies expectations. It’s long been recognized that Nigel Bruce, as beloved as he was, played a bumbling simpleton in the long-running Rathbone series that was nothing like Conan Doyle’s original conception of Watson. Subsequent Watsons in more recent films have been at pains to tip the scale in the other direction, restoring the good doctor’s intelligence and making him a more likely companion for Holmes. In the 1916 film, as played by Edward Fielding, Watson conforms to neither of these types—he’s just there. And, in fact, much of the time he’s not there; long stretches of the plot go by without him, before he shows up to observe the latest development. The relationship between Holmes and Watson, so much a part of later film versions, simply doesn’t exist yet in 1916.
As for the film itself, I won’t be guilty of any spoilers here. Suffice it to say that the filmmakers “open up” the play subtly, but wisely allow it to proceed at a deliberate pace. This allows us the leisure to enjoy the performances and the obvious dramatic set-pieces, still effective today as they undoubtedly were in 1916. Director Arthur Berthelet indulges in an interesting stylistic conceit in some scenes: the action will pause in mid-stride while the shot cross-dissolves to a different angle—often moving from a medium shot to a closeup—and then, in some cases, moves back to the original angle in the same way. In 1916, of course, those dissolves were being made in the camera, and the effect is clearly a deliberate one; in some cases we can see the actors waiting until the dissolve is complete before proceeding with their action.
All in all, this film is a delight and well worth the wait. It’s always a happy day when a “lost” film is recovered; the restoration of the Essanay Sherlock Holmes, on the eve of its centenary year, is a particularly glad occasion.