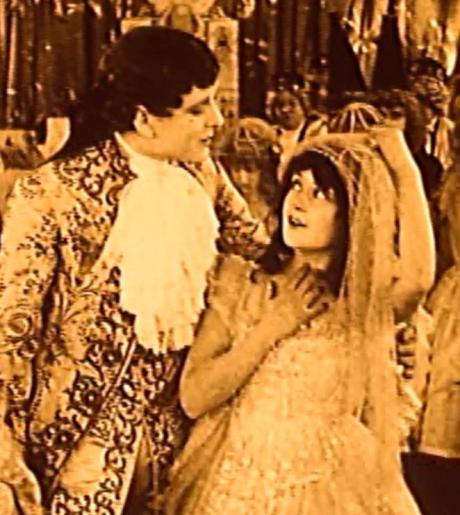 I’ve written at length about this film in my book The Fairest One of All, and ordinarily I don’t like to repeat myself in this column. However, I’m bending that rule a little in honor of a special occasion. Snow White and the Seven Dwarfs , the classic Walt Disney animated feature, is being released to the home video market on a new Blu-Ray edition—i.e. newly remastered in high definition, and therefore, presumably, closer to the visual quality of the original than any video edition we’ve seen to date. This is cause for celebration, and as part of my celebration I’m bringing another Snow White to the party: the silent Paramount version of Snow White , starring Marguerite Clark in the title role. This film is inseparably linked with Disney lore in that Walt Disney saw it as a teenager in Kansas City, and later acknowledged its influence; moreover, this Snow White marks its own centenary year in 2016. More than enough reason, I think, to call attention to this one in its own right.
In the book I dwelt on the subtle similarities, and the huge discrepancies, between this film and the Disney version. Here I’ll confine my remarks to the 1916 Snow White itself, and its roots.
Snow White was, of course, indirectly based on the traditional fairy tale as retold by the Brothers Grimm in the nineteenth century. Its more immediate source was a stage version mounted by producer Winthrop Ames in 1912. Both the play and the subsequent film featured Marguerite Clark in the role of Snow White. Sweet-faced Marguerite Clark was in her late twenties during these years, but she was part of the popular vogue for child/woman actresses and slipped easily into childlike roles. Her performance as Snow White was no exception. She “plays the part as simply and ingenuously as if she were no older than ten,” one critic wrote approvingly when the play opened in 1912. “Not one note of maturity in her voice nor act nor movement of an adult marred her characterization.” Her characterization is preserved for posterity in the film and, indeed, reveals a Snow White who is buoyant, dainty, and irrepressibly cheerful. In one early scene she greets the Huntsman’s children, who run to her side as if she were a favorite babysitter. Fashions of 1916 were nothing like those of today, of course, but it’s not difficult to understand why audiences willingly surrendered to Marguerite Clark’s gamine charm.
“Charming” is also an appropriate adjective to describe the film itself. Unlike the Disney Snow White, the 1912 play and the 1916 film were made primarily for children. For that reason, the Queen’s murderous intentions toward Snow White, and other potentially distressing aspects of the story, were toned down or smoothed over. Happily for older viewers, much of this “comforting” was done by way of droll comedy touches that are equally pleasing to adults. Princess Snow White’s banishment to the kitchen to work as a scullery maid, for example, is treated almost as a game. When a new lady-in-waiting arrives at the palace, she is escorted to the kitchen, where the Princess in rags formally receives her as if it were all great fun. The Queen’s vanity is played for laughs, and when she refuses to let Snow White leave with the Prince, it’s on the pretext of sending her away to “a Boarding School for Backward Princesses.” When she demands the heart of Snow White, it’s because the Witch (an entirely separate character here) needs a maiden’s heart as an ingredient in a hair restorer. And when the Huntsman delivers a pig’s heart instead, the Witch adds it to her mixture, whereupon her scalp is immediately covered with tiny pigs’ tails!
When Winthrop Ames first produced the play in 1912, he wrote the script himself (under a pseudonym). In preparing the script for the Paramount film, Ames worked with director J. Searle Dawley, creatively adapting the story to the new medium. Sections of the play were eliminated—long dialogue passages, and musical numbers, neither of which were ideal for a silent film. In turn, Ames and Dawley added new elements that were appropriately cinematic. The Huntsman, a minor supporting player in all other versions of the story, becomes a major character in this one. Long sections of footage are devoted to his and his children’s imprisonment in the “Grey Tower,” and subsequent escape. The Brown Bird, a stuffed prop in the stage version, is played by an actual bird in the film and has some charming scenes with Snow White. Too, Dawley and Ames took the opportunity to indulge in some modest camera trickery. The Witch’s sudden adornment of pigs’ tails was accomplished on stage by having her duck quickly out of sight and don a specially-made skullcap. Here, the tails fade slowly into sight in full closeup. At film’s end, when the rescued Snow White is crowned Queen, the crown magically fades into place on her head. Dawley told an interviewer that accomplishing this dissolve shot, on a stage crowded with extras, was a distinct technical challenge!
Considered a “lost” film for decades, Snow White resurfaced in the 1990s in an original exhibition print and was restored. The print had seen considerable wear during its theatrical release and was, inevitably, tarnished by scratches and splices. But these blemishes are a small price to pay, and serve as a reminder of just how fortunate we are to be able to revisit this lovely, essential film at all.