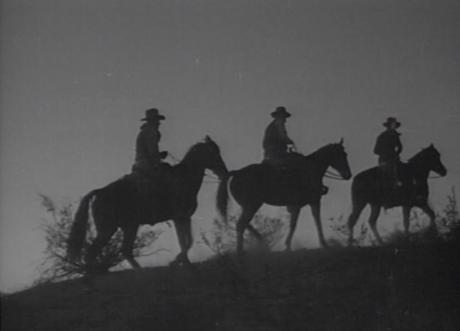 It’s December again (already!)—the season of Christmas movies, and time for a fresh reminder of just what a crowded and wildly varied category that is. I don’t think there’s a more offbeat Christmas story anywhere than Three Godfathers. For one thing, it comes from an unlikely genre: Three Godfathers is a Western—a story of outlaws in the Old West, based on the 1913 novel by celebrated Western author Peter B. Kyne. For another thing, there’s the sheer multiplicity of versions: Kyne’s story has been brought to the screen no fewer than five times between 1916 and 1948. (And that’s not counting The Sheriff’s Baby, directed by D.W. Griffith at Biograph in 1913. Griffith’s short film acknowledges no source, but bears a striking resemblance to Kyne’s novel and to his earlier, similar, short story “Broncho Billy and the Baby.”)
These numerous adaptations make for some fascinating side-by-side comparisons, but they all share a basic plot thread: three outlaws rob a small-town bank, escape into the desert, and suffer a series of mishaps. Encountering a dying pioneer woman and her infant son, they are drawn into a scenario with haunting parallels to the Christmas story, and their journey ultimately becomes a tale of redemption. To today’s viewer, by far the most familiar of these films is the 1948 version, directed by John Ford with his patented blend of rugged Western action and poetic romanticism. The 1930 version, Hell’s Heroes, directed by William Wyler in both silent and sound editions, has also received a new wave of attention in recent years. (I, for one, commented on it in passing in an earlier installment of this column.)
Coming between two higher-profile films by Wyler and Ford, it’s perhaps not surprising that the 1936 version, directed by Richard Boleslawski, is relatively little known. And yet, like so many overlooked films, the 1936 Three Godfathers is a thoroughly satisfying little film on its own terms. Produced by Metro-Goldwyn-Mayer, the richest and most prestigious studio in Hollywood, it displays the characteristic MGM production gloss. It also benefits from a smart, subtle script that introduces some unique little touches of its own.
In all versions, the focus of the story is on Bob Sangster—the leader of the gang, the baddest of the bad, and consequently the one most in need of redemption. This character is played by Charles Bickford as a loutish brute in 1930, and by John Wayne as John Wayne in 1948. In our version the role is taken by Chester Morris. I don’t know why Chester Morris isn’t better remembered today; he was a strong screen presence and a talented actor, and fully deserved the stardom he enjoyed in the late 1920s and 1930s. When he is remembered today, it’s usually for urban crime dramas like Alibi and The Big House, so his casting as a cowboy in Three Godfathers seems counterintuitive. No matter; his Bob Sangster is a memorable version of the character—a coldblooded, cynical, emotionless killer whose acts of evil are carefully calculated. His two partners in crime are Walter Brennan, already playing his stock grizzled old-timer, and Lewis Stone, a reliable member of MGM’s acting company, who brings his familiar courtly dignity to his role as a bank robber.
One key element in the story is that of the outlaws’ interaction with the local citizens before the bank robbery. In this version, the little town of New Jerusalem is the Morris character’s home town; and his is something of a bittersweet homecoming, the locals instantly on edge the moment they see him. This is where the film’s skillfully written script pays off; it’s clear that Morris has a troubled past in this community, but the script cleverly avoids the details. Instead, the tension in the air suggests Morris’s uneasy relationship with his erstwhile acquaintances—especially Irene Hervey as his former sweetheart, now engaged to the town banker. The scenes in the town become a series of vignettes showing the three men’s exchanges with the citizens. For the benefit of those who haven’t seen the film, I’ll avoid any spoilers here; suffice it to say that the writing of these passages is deft and, in one scene, wickedly funny.
With the robbery and the flight into the desert, the film shifts gears. Here the dramatic crux of the story occurs, and its effectiveness depends heavily on skillful writing and acting. Here again I’ll refrain from giving away details, for those unfamiliar with the story. But I can report that here, more than ever, the burden of the film is on Morris, and he proves himself more than equal to the acting challenge. His climactic scenes in the desert are underplayed and genuinely moving, and the end result is a warm, memorable film experience. And if, at film’s end, Boleslawski and the writers relax their control and allow some obvious symbolism and a touch of excessive sentiment, we can forgive it. Sentiment has its place on the screen, especially in a Christmas film—even so unusual a one as Three Godfathers.