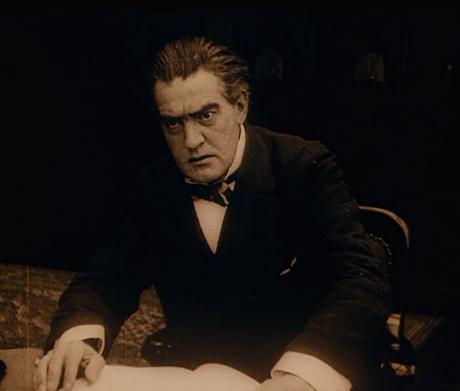 This has been an unusually good year for video releases of silent films, and November, the month of Thanksgiving, is promising a bountiful harvest. Pioneers: First Women Filmmakers is a tremendous DVD/Blu-Ray collection from Kino Lorber, a whopping six discs filled with films directed by women during the silent era. Film enthusiasts have always known the important directorial role that women played in the industry during the silent years, but what a treat to have this many examples collected in one place! The result of a long-term collaboration between Kino and the Library of Congress, this set will highlight more than fifty films (in the Blu-Ray edition), both short and feature-length, directed by women ranging from the well-known (Alice Guy Blaché, Lois Weber) to the obscure (Cleo Madison, Elsie Jane Wilson). Some of these films have already been available to the home viewer on DVD, but many have not; and all will appear here in new high-resolution scans.
As it happens, two titles in the collection are films I’ve already featured in earlier editions of this column. But in honor of the occasion, I’m going back for a third. Lois Weber earned herself a distinctive niche in film history with films that tackled serious social issues. Where Are My Children? is a prime example, weighing in on the related topics of birth control and abortion—topics which, after more than a century, are still peculiarly timely today.
But if her subject matter fits naturally into today’s conversation, Weber’s approach to her topics is a different story. Where Are My Children? is apt to provoke lively discussion among modern viewers who see it for the first time, for it fits into none of our convenient political agendas. In 1916, of course, Weber had cultural mores of her own to deal with, and faced some opposition even in addressing the subject of birth control in a motion picture. This film was, in fact, condemned or banned in some communities upon release. The early scene depicting the trial of a doctor for publishing a book on birth control was recognized at the time as a thinly veiled allusion to the legal controversy then swirling around Margaret Sanger over her publications on the subject of family planning. Throughout her career, Lois Weber earned a reputation as a Progressive thinker for boldly addressing social issues on the screen, and she upholds that reputation with her support for family planning in Where Are My Children?
At the same time, the bulk of her footage is devoted to abortion—and here Weber takes the opposite tack, railing against abortion and abortionists in no uncertain terms (another parallel to Sanger). Much of this film could be used as propaganda by today’s most virulent anti-abortion forces. And all of this is underpinned by an explicit support for eugenics—a science that enjoyed some popular currency in 1916, but, in the wake of Nazism and other racist ideologies of the twentieth century, appears in a very different light today. Moreover, Weber’s chief protagonist is not a victimized woman, but a man who wants children, and whose wife secretly thwarts that wish by obtaining multiple abortions—a choice that is portrayed as an act of egregious selfishness.
All of this story material is slammed across with force in Where Are My Children?; Weber attacks her subject not with subtlety but with passion. Sympathetic and unsympathetic characters are clearly delineated, and the character of the abortionist is given the name “Dr. Malfit,” just in case anyone missed the point. On the other hand, Lois Weber was a filmmaker, possessed of an innate talent that she would continue to develop as her career progressed. Here she is capable of inserting subtle touches when she wants to; in one early scene two characters convey a world of meaning by an exchange of wordless, underplayed glances across a room. At several junctures Weber makes an editorial point by intercutting two contrasting scenes, a technique that Griffith had used in many of his films—as when a family admire their eugenically superior baby, while, in another location nearby, a girl facing an unwanted pregnancy confronts her seducer. And the film concludes with a remarkable closing shot. In an allegorical tableau the childless couple sit before the fire, evolving before our eyes from maturity to middle age to old age—attended by the phantoms of the children they will never have.
For years, Where Are My Children? was known to survive in two incomplete prints, one in Europe and the other in the U.S., each containing footage that was missing in the other. In 2000 the two fragments were pieced together, with the help of the original script, into one substantially complete version, which was then included in one of the marvelous DVD collections issued by the National Film Preservation Foundation. Now, with the release of the new Kino set, we can look forward to the latest reconstruction of this and other pioneering works by an earlier generation of talented female filmmakers.