South of the Border with Disney 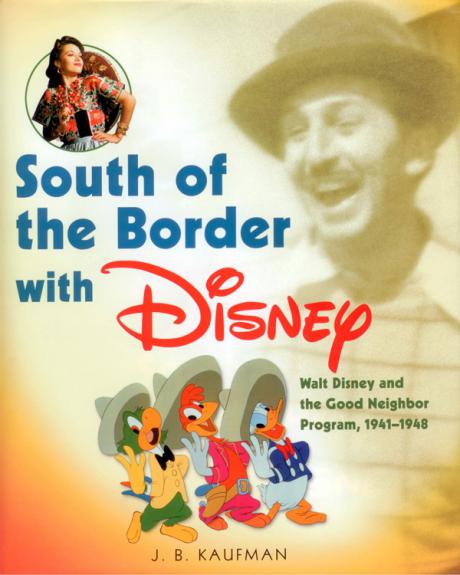 An in-depth history of the Walt Disney studio’s involvement in the Good Neighbor program of the 1940s, with a foreword by Diane Disney Miller.

Beginning with the 1941 tour of South America by Walt and his team of artists nicknamed “El Grupo,” this book charts the Disney studio’s unique involvement with a government initiative designed to improve relations between the U.S. and South and Central American republics during World War II. El Grupo’s two-month tour was only the beginning of this involvement; it led to the making of two Disney features and a long list of short subjects with Latin American themes and content. This book, chronicling the rich cultural and artistic history of the project, is the first in-depth account of this fascinating story. Richly illustrated, with an extensive filmography of all the Disney Good Neighbor films, a selected discography of Ary Barroso’s music, and notes on Disney comics produced in connection with these films.

1. Ambassadors of Goodwill. At the request of the Coordinator of Inter-American Affairs, Walt and a hand-picked group of artists spend two months in South America, cementing good relations and gathering story material for a future series of Latin-themed films.

2. Saludos Amigos. Returning to California, the Disney artists tackle the first four of what are supposed to be a series of short cartoons based on their experiences in South America. At the last moment the four shorts are combined into one feature-length picture, Saludos Amigos, which is tremendously popular in both North and South America and introduces a new Disney character: Joe Carioca, the Brazilian parrot.

3. Selected Short Subjects. Many of the other story ideas are developed as short subjects, as originally planned. This chapter examines those shorts, including some that were developed and then abandoned.

4. Films for the Americas. The Disney studio’s commitment to the Good Neighbor cause included an extensive program of nontheatrical films, on health and educational subjects, distributed on 16mm in Latin American countries. This chapter revisits those films, some forgotten today and others treasured as animation cult favorites.

5. The Three Caballeros. The studio’s second Good Neighbor feature, planned along the lines of Saludos Amigos, evolves into something very different, produced on a much larger scale and including a lengthy segment devoted to Mexico. This is the classic The Three Caballeros, which features wild, surreal imagery, introduces Panchito, the Mexican charro rooster, and includes appearances by live-action performers, including the lovely Aurora Miranda, Dora Luz, and Carmen Molina.

6. Blame It on the Samba. The studio proceeds with a third feature, but abandons it when the war ends and the Good Neighbor program is dissolved. Some of these stories and musical segments, already extensively developed, make surprise appearances in later Disney films, and the overall experience of the Good Neighbor years is woven into the fabric of the studio and becomes an enduring part of its legacy.

The Three Caballeros will always hold a place in my heart. As a child of the 1960s and early 70s, at a time when my class mates were experimenting with mind-altering drugs, I was getting my high off screenings of early 30s Fleischer cartoons and Disney’s South American psychedelics. Is there anything trippier than the last 45 minutes of The Three Caballeros or the Blame It on the Samba sequence in Melody Time? I’ve always wondered what the thinking was behind these films and now, finally, I have all the answers.

J.B. Kaufman’s new book, South of the Border with Disney, should be a permanent addition to your Disney or animation history bookshelf. It covers El Grupo’s South American tour thoroughly and, more importantly, follows through to discuss each film that resulted from that initial trip, a complete examination from development to end product—from Saludos Amigos (1943) to Destino (2003).

The book explains things I had always wondered about (for example, why Saludos Amigos was also released under the title Saludos; or why Panchito was never used on screen again), and reveals new facts I had no idea of (such as definitive information on all the unfinished shorts and aborted feature concepts; and that half of the live-action footage used in Saludos Amigos was actually shot in Burbank, months after the trip to South America). Kaufman (who has emerged alongside Canemaker and Barrier as a leading Disney historian) discusses in depth and in detail, not only the well known features and shorts, but the more obscure nontheatrical health films and rarely seen documentaries Disney made primarily for the Latin America markets. You will not find this information anywhere else.

The appendix includes a complete filmography, a discography and information on related South America-themed Disney comic books. It’s not an “art book” per se, but there are ample color illustrations from the Disney Archive to illustrate the text, and overall a high quality job in all printing aspects. For me, this is the animation book of the year. A great read, and I highly recommend it.

I have just received a review copy of JB Kaufman’s new book, South of the Border with Disney: Walt Disney and the Good Neighbor Program, 1941-1948. Let’s admit it: knowing JB I expected something really good text-wise, something really in-depth, something in which I would learn a lot, something that would fill half a million key gaps in Disney history. I had been looking forward to this book since 2001. Eight long years. So if I said that I could not wait to open the package that contained it, you will not be surprised. What happened next was not expected though: when I started browsing through this new book I simply could not believe my eyes. The text is more complete and more in-depth than literally anything I could have imagined. I believe that only four Disney historians are as thorough: Michael Barrier, John Canemaker, Paul F. Anderson and JB Kaufman. So there is even more to learn in the text itself than my wildest dreams built over 8 years had made me expect. How is that for a stunning start?

But there is more! The quality of the illustrations is as astounding as the text. At least half of the visual documents are “never seen before.” I had goosebumps by looking at almost every single page of this book. I had started to think that aside from the Canemaker books and The Disney that Never Was by Charles Solomon, we would from now on be offered either great text-books (Working with Walt by Don Peri for example) or great art books with no text (The Disney Archives Series for example). Unfortunately JB’s Silly Symphony book had not dispelled this impression (great text with uninteresting visual documents).

South of the Border with Disney shows that I was wrong: ideal books can exist. Books about Disney history as we dream them. Books that are as close to perfection as we will ever get.

By the way: this is the first book released under the Walt Disney Family Foundation label. What an impressive way to start. Disney history is truly alive and well today.