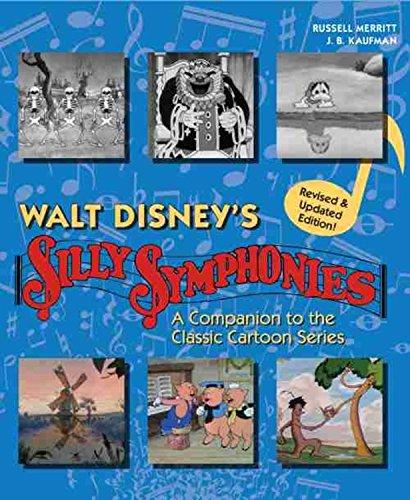 by Russell Merritt and J.B. Kaufman
Originally published in 2006 but long out of print, Walt Disney’s Silly Symphonies returns in a specially revised and updated 10th-anniversary edition. This is the ultimate companion to the Silly Symphonies (1929-1939), a landmark series of films originally launched by Walt Disney as a “musical novelty.” The Symphonies soon blossomed into something far more ambitious: an innovative series of animated cartoons that introduced new characters, ideas, and techniques with each new release.

Here the Disney studio pioneered groundbreaking developments in character animation, sound recording, Technicolor photography, and camera technique; here the Disney artists produced such indelible classics as Three Little Pigs and The Old Mill, along with dozens of lesser-known titles. The full history of these fascinating films is captured in this book, now enhanced with painstaking new research by the authors and with a wealth of new illustrations, including rare and previously unpublished production art.

The Tiffany Line
An introduction to the world of the Silly Symphonies, with extensive background on artistic influences and thoughtful analysis of themes, psychology, and storytelling technique.

The Silly Symphonies: A Filmography
The main body of the book, with minutely detailed filmographic entries on each one of the 75 Silly Symphonies (along with a 76th title, the award-winning Ferdinand the Bull, which started production as a Silly Symphony but was ultimately released as a “special”). Each entry includes production dates and details; exhaustive story, animation, and musical credits; guide to source music; and full information on copyrights, openings, distribution, and later television premieres, as well as notes on awards and other distinctions.

Appendix B: Unfinished Symphonies
A survey of the many unused Silly Symphony story ideas: outlines that were proposed and later abandoned, or adapted in some other form.

Appendix C: Sunday Color Comic Pages
A complete index of the color Silly Symphony Sunday comics, from the beginnings of the strip in 1932 through the last installment ten years later.

Appendix D: Silly Symphony Discography
Full discographic information on the many popular and jazz recordings of “Who’s Afraid of the Big Bad Wolf?” and other popular songs that originated in the Silly Symphonies.

Appendix E: Silly Symphony Books, 1934-1940
A detailed list of Pop-up Books, Big Little Books, and other storybooks based on the Silly Symphonies during the 1930s.

Jerry Beck, Cartoon Research:
If, like me, you have a well-worn copy of Merritt and Kaufman’s 2006 edition of Silly Symphonies (originally published by Italy’s La Cineteca del Friuli, distributed by Indiana University Press), you’ll be delighted to know that Disney Editions has just reprinted the book—with generous updates to the text and numerous new illustrations. Let me be clear: This. Is. A. Must. Have.
The improvements start with the end papers, which are liberally illustrated with line-art (b/w) of Silly Symphony posters (taken from studio publicity press sheets). Here we get our first glimpse of several rarely seen pieces—including the original posters for Music Land, The China Shop, The Golden Touch, The Goddess of Spring and many others I’ve never seen before.
The main text has been given a thorough polish that has been informed by new research by the authors. Each Symphony gets a spread (or two) detailing all production credits (animation, music, layout, background, etc.), with synopsis, notes, negative costs, release data, broadcast and DVD release information—and more. No stone left unturned, no bit of information left out. Oh, for such a volume on every (or any) other series of Hollywood cartoons.
The Appendix covers associated shorts (Hot Chocolate Soldiers, Don Donald, etc.), unfinished Symphonies, the Sunday comic pages, Silly Symphonies records, children’s books, and Good Housekeeping pages. Most images remain from the previous edition—but the few changes and additions add perfectly to the story. Several notable art excisions in the revised edition, made for political correctness, include the removal of The Big Bad Wolf in peddler disguise, and the substitution of a frame featuring a jungle native in Cannibal Capers (1930) to a safer shot of a lion cooking stew. A screen grab of topless mermaids from the pre-code King Neptune (1932) has also been replaced. All of these changes are understandable and the editors only used the situation to improve the visuals for these entries.
All in all, a joy to read and a vital reference. Needless to say, Merritt and Kaufman have created the definitive tome on the subject. Highly recommended, sez I.